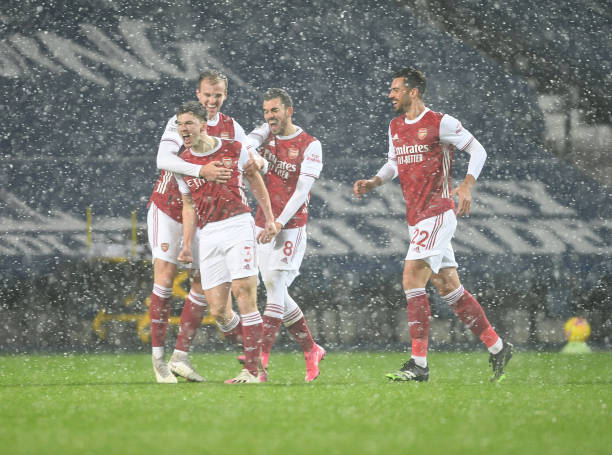 Arsenal were on Saturday welcomed at The Hawthorns by West Brom Albion and they came into the game with confidence of making it three wins in three matches as they had just beaten Chelsea and Brighton & Hove Albion and they were successful in doing that in flying colours as they won 4-0. Arsenal manager Mikel Arteta has spoken out on the win.

The gunners started the game well as they continually attacked the home side without letting them get any chance of scoring and they finally got the opening goal of the day through Kieran Tierney who scored a stunning goal to make it one nil for the North Londoners. The gunners later doubled their lead after a vintage Arsenal move which Lacazette pass to Smith Rowe who then slid to Bukayo Saka who scored to make sure the gunners go into halftime with a two goal advantage.

Two goals from Lacazette saw Arsenal beat West Brom Albion 4-0 last night and that was obviously a match that Mikel Arteta enjoyed as his team was performing poorly in the last few months. Mikel Arteta was joyous in the post match interview and said that he was happy with the performance as he had told his team that they have to win their last three matches.

“It’s always tough to win away from about the importance of this week for us and to be able to win all three of them is really important.”home and the way we’ve done it was in a really convincing way, especially in this difficult weather but I’m really pleased.” Mikel Arteta told Arsenal’s official website.

“It’s three in a row now in the last week and we talked about the importance of this week for us and to be able to win all three of them is really important.”

Devoted Arsenal fans could save over £1,600 because of COVID-19