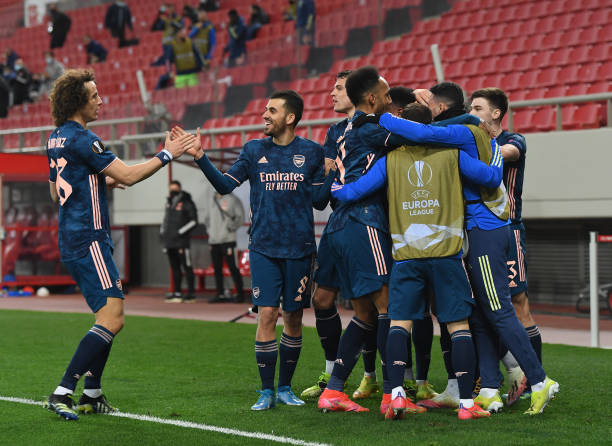 Arsenal celebrate their second goal in the first leg in Greece. (Photo by Stuart MacFarlane/Arsenal FC via Getty Images)

Arsenal head into the second leg of this tie with a comfortable lead having beaten the Olympiacos 3-1 last week in Greece. The Gunners picked up three away goals putting themselves in a safe position to play the encounter at the Emirates stadium with ease.

It’s certain Arsenal have sailed through to the Europa League quarterfinals unless Olympiacos put up a stunning performance.

Therefore it is expected that Arteta will make some rotations to the team and give some players a rest and others a chance to play.

The major rotations are expected to be in the frontline with Aubameyang returning to the lineup after being left out of the Spurs game because of a discipline case. Willian and Pepe are also expected to start.

Saka will be rested after he picked up an injury though it isn’t serious, while Odegaard will also be given a rest after starting consecutive games for Arsenal.

Elneny should be given a start after his brilliant cameo in the first leg enabling Xhaka to finally get a rest after playing so many games. Finally the backline could also be changed with Bellerin returning, Mari and Holding given the nod in central defence.