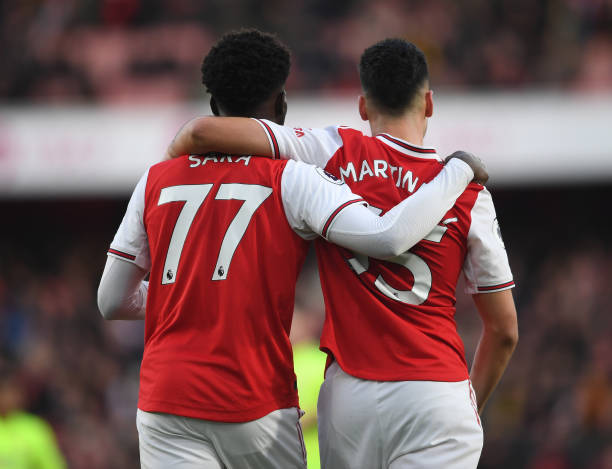 Arsenal are gifted with many young talents and they are making sure they tie them down to long term contracts.

Saka and Martinelli have been penned down new long-term contracts and now Folarin Balogun has also joined them after speculation that he could leave.

Let’s look at how Arsenal can lineup with just a team of young players not older than 23 years.

A lineup of Arsenal’s youngsters.

The 19 year-old goalkeeper has made nine appearances for the U23 side and has also been called up to the senior side during Europa League games, though he is yet to make his debut.

You might not have heard his name but he plays right-back for the U23s and he has been impressive ever since signing his professional contract last year. Not much to write about him yet but he makes this team.

Currently on loan at Nice in France and enjoying his time over there. Saliba deserves trust from Arteta starting next season. He is yet to debut for the seniors but he remains highly rated.

The 23 year-old Brazilian has had a mixed first season at Arsenal, at times he has impressed and looked like Arsenal’s best central defence option and of recent he has made mistakes and lacked calmness and composure.

Age is on his side he will get better with time and proper coaching.

Tierney completes the backline and if this team ever played together he would no doubt be the captain. The Scotsman is a serious contender for next Arsenal captain.

Dubbed the “next vieira” the 18 year-old midfielder is on the verge of getting a full promotion to the senior side. He is Arsenal’s biggest talent in the academy alongside Balogun.

Currently on loan at Hertha Berlin after being exiled from the Arsenal squad. Guendouzi has the potential to be special once he controls some of his weaknesses and focuses. In my opinion he deserves another chance at Arsenal and shouldn’t be sold.

Already a regular in the first team, he is among the best young players in the world. The sky is the limit for the 19 year-old.

Smith-Rowe is having an incredible breakthrough season and has been a regular in the starting lineup ever since Arteta reverted back to the 4-2-3-1 formation. He still has a lot of things to learn just like any other player on this list but he already looks like a gem.

The phenomenal Martinelli has shown hunger and desire every time he has been on the. Arteta has chosen to use him sparingly ever since his return from injury. He however hasn’t been as lethal as he was before he picked up the long term injury. His mentality is top notch and with continued hard work he will be special.

Balogun has signed a new contract.

Balogun has put pen to paper and signed a long-term contract. Many fans are eager to see Balogun given a chance in the first team, he already has two goals for the senior side despite not starting a single game.

His style of play and goal scoring record gives him an edge over Nketiah.

Arsenal receive good news ahead of their clash with Villarreal