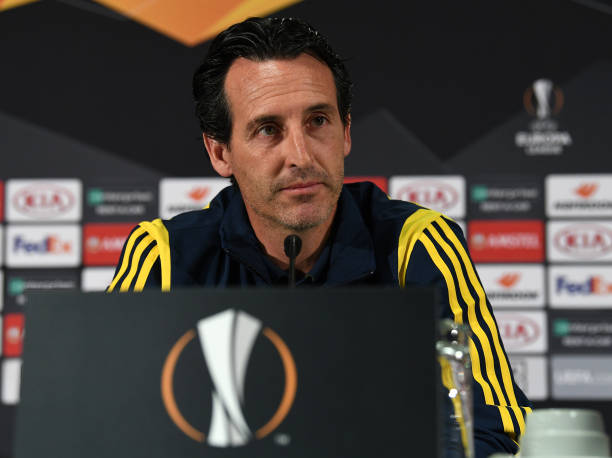 The UEFA Europa League semi finals will start this week and Arsenal will face Spanish side Villarreal away from home and this will be an important game for both clubs since they have both been poor in their respective leagues. Villarreal is managed by former Arsenal boss Unai Emery and he has talked about the squad of the North Londoners and the conversation he had with Mikel Arteta.

Arsenal appointed Mikel Arteta as their new manager in December, 2019 a month after the departure of Unai Emery who had spent 18 months in North London club with his best achievement being taking the gunners to the UEFA Europa League final which they however lost to Chelsea. Mikel Arteta will be hoping to do the same but this time with the aim of winning the whole thing but he will have to beat Unai Emery in the semi finals to do that.

MANCHESTER, ENGLAND – NOVEMBER 01: Arsenal manager Mikel Arteta during the Premier League match between Manchester United and Arsenal at Old Trafford on November 01, 2020 in Manchester, England. Sporting stadiums around the UK remain under strict restrictions due to the Coronavirus Pandemic as Government social distancing laws prohibit fans inside venues resulting in games being played behind closed doors. (Photo by Stuart MacFarlane/Arsenal FC via Getty Images)

Former Arsenal boss Unai Emery has praised the current side of the North Londoners ahead of the clash with Villarreal and he has spoken out on the players that he believes will give him a hard time in Thursday’s game in Spain.

“They have a very marked identity and they show a lot of progress with Arteta. They have top quality players, Ceballos, Odegaard, Saka, quick players Aubameyang, Bukayo, Martinelli. They have a very solid defensive structure. They can do a passing structure. It’s going to be a very tough match.” said Unai Emery as quoted by Football.London.

Unai Emery was sacked by Arsenal after the gunners finished many weeks with no league wins and after the interim spell of Freddie as gunners boss, Mikel Arteta was appointed and he said in the press conference that he talked with his predecessor. Unai Emery was asked what it was about they talked about and he said that it was private but talked about the type of things he told him.

“I just wanted to tell him about my experience there. Maybe I told him one thing or two about things that could be improved and all I feel for him is admiration.” said Emery.