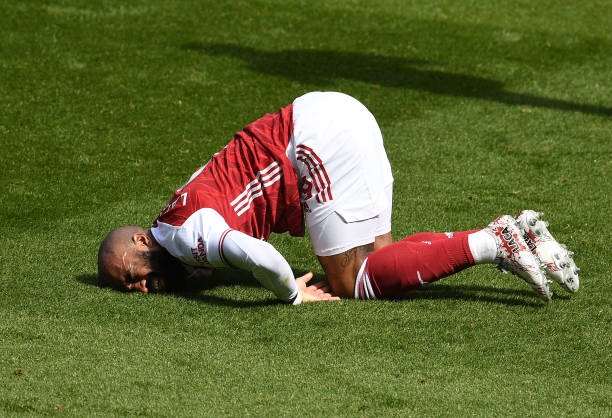 Arsenal will on Sunday face Newcastle United at St. James Park Stadium and this will be a perfect opportunity for the gunners to try to regain their spirits ahead of their biggest game of the season. The gunners have released their latest team news ahead of the game against Newcastle United with updates on the injuries of Alexandre Lacazette, David Luiz and Kieran Tierney.

David Luiz has been on the sidelines for weeks now and the gunners have missed him in their previous matches as he is usually their best player when it comes to playing out of the back and is also a great extra creativity source with his long balls that can sometimes set up Mikel Arteta’s fast attackers.

The club has confirmed in the team news that the Brazilian has returned to full training and that he is in contention for the game against Newcastle United.

Kieran Tierney got injured in a Premier League game a few weeks ago and it was first reported that he would be out for the rest of the season but the Scottish international has surprised many with him still having a chance to feature again for Arsenal in this 2020/21 campaign.

The club confirms that Kieran Tierney is integrating back into full training and that he will be assessed before its decided whether he gets into the squad that faces Newcastle.

Alexandre Lacazette got injured in Arsenal’s draw with Fulham and has been on the sidelines since but the latest team news confirm that he is indeed starting to integrate back into full training but that he will however not be available for the game against Newcastle United.