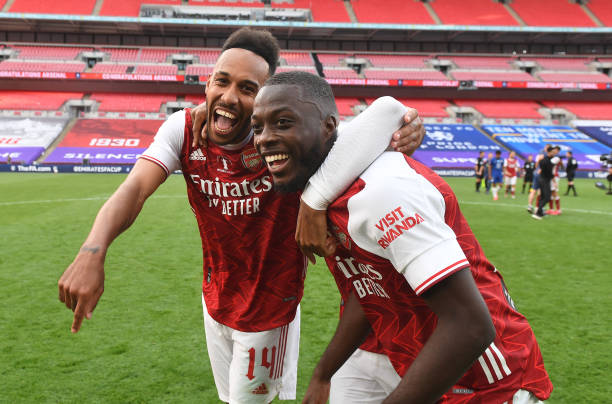 ( Aubameyang and Pepe / Photo via Getty )

Arsenal have nothing much to fight for in the last games of the season but they will however always have the motivation to win derbies and they will on Wednesday face their London rivals, Chelsea at Stamford Bridge and so here is the predicted lineup of the North Londoners with all eyes on Pierre-Emerick Aubameyang and Nicolas Pepe.

Bernd Leno hasn’t done much wrong in the last few weeks and so there won’t be any reason for the German goalkeeper to be benched.

Bukayo Saka was at the weekend very impressive at left back in the game against West Brom Albion as he got an assist and so he will probably be deployed in that same position. Arsenal boss Mikel Arteta is likely to use the same back line as the one used at the game against The Baggies.

Thomas Partey did not start in the game against West Brom Albion at the weekend but he could however be brought back into the starting to be partnered with Dani Ceballos since its still not known if Granit Xhaka is off the injury list.

Nicolas Pepe and William scored spectacular goals in Arsenal’s 3-1 win over West Brom Albion on Sunday and so they will definitely start on the flanks against Chelsea while Emile Smith Rowe starts as an attacking midfielder.

Pierre-Emerick Aubameyang did not start for Arsenal in the win against West Brom Albion but he will however be needed for the game against Chelsea this Wednesday.