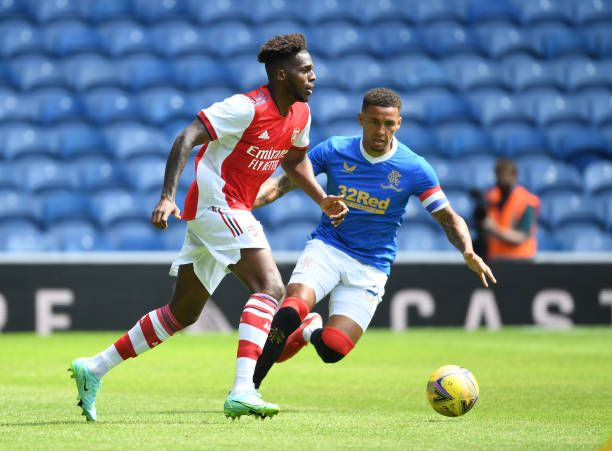 Nuno Tavares became the first 2021 summer signing of Arsenal after arriving at the Emirates Stadium from Benfica on a fee believed to be around €8million and the Portuguese was immediately included in the group of players that were taken for the Scotland camp. Nuno Tavares was given his debut on Saturday and he surprised many with introducing himself to the fans with a banging goal against The Scottish Champions.

Arsenal faced the Scottish Champions Rangers at the Ibrox Stadium and they came away with a 2-2 draw and Nuno Tavares was among the best performers in the game even though he got subbed after the first half. Tavares equalised for the gunners in the first half after his persistent pressure saw him get away from a Rangers defender and he then sent an outstanding shot into the back of the net to make it 1-1.

Nuno Tavares faced the media after the game and was asked about scoring his first Arsenal goal and he claimed that he was happy about it, and this being the first time he had put on the jersey of the North Londoners in a game.

“I felt good. It was a good game for me and for us. A good test. I think we had a good match and we learned a lot.” Nuno Tavares told Arsenal Player.

“I feel very happy to score my first goal with Arsenal. I’m so excited for this and today I did it.”