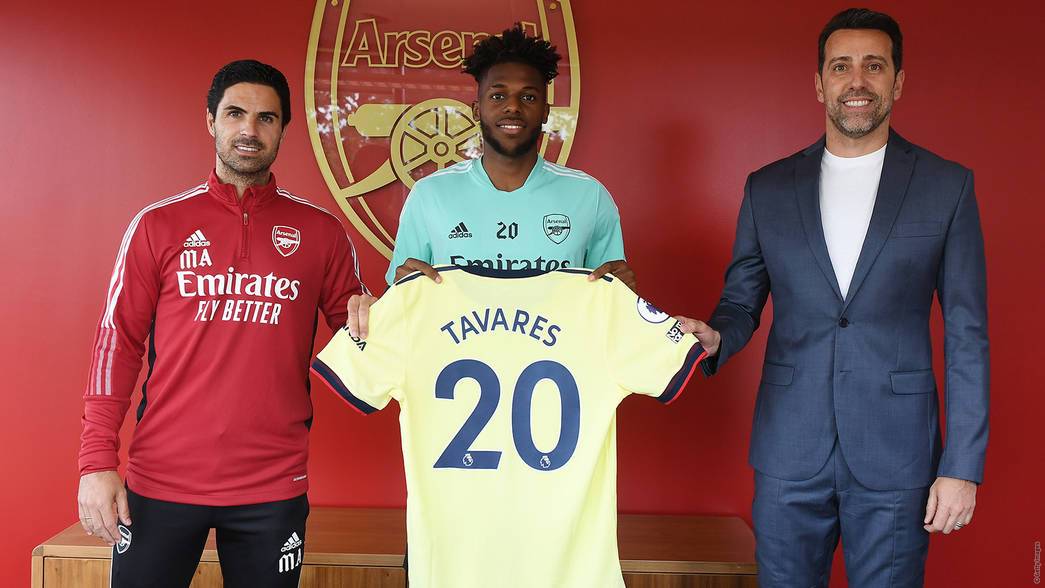 Nuno Tavares with Arteta and Edu. (Photo via Arsenal)

Arsenal have completed the signing of Nuno Tavares and he is now officially an Arsenal player as displayed on the official website. The confirmation of the arrival of Nuno Tavares comes just after a few weeks if not days since he got linked with a move to Arsenal, showing how the gunners will be fast in completing their deals this summer.

Tavares has joined from Benfica on a 5-year deal until 2026 and has cost Arsenal €8m.

The Portuguese fullback becomes Arsenal’s first signing of the transfer window and is likely to have been signed as a back up for Kieran Tierney as he will be the first choice fullback of Mikel Arteta.

The Arsenal supporters  will be pleased that the club has confirmed their first signing with many weeks left before the new season starts as the North Londoners have always been known for doing their business very late.

Arsenal technical director Edu Gaspar had this to say about the arrival of Tavares;

“Nuno is a talented young player who was wanted by a number of clubs across Europe. He will provide strong back-up in the left-back position. We look forward to him growing and developing with us and becoming an important member of the first-team squad.”

Arteta on Nuno Tavares signing: “We welcome Nuno to the club. He is a young player with great promise who has developed very well with Benfica in recent seasons and has also shown his quality by being part of Portugal Under-21s. Nuno’s arrival will give the squad extra strength and options in defence, particularly with this energy on the left side of the pitch. We look forward to Nuno’s arrival soon, his integration into the Arsenal family and playing in front of our fantastic supporters.”

Tavares will wear the number 20 shirt that was vacant and join his new teammates for the preseason campaign.