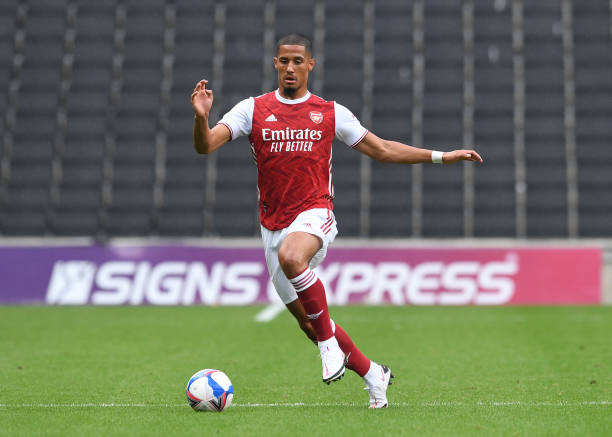 Arsenal defender William Saliba is on course for a loan move to Marseille according to a report from The Athletic.

Saliba has reportedly chosen Marseille among the various clubs which had registered interest in him and will spend the 2021/22 season there.

Arsenal still consider Saliba as part of their long-term future and want him to get a full season playing. Yesterday he decided to withdraw from the France Olympic squad  and many had thought that this decision was made so that he would be involved in Arsenal’s preseason.

The latest developments show that Arteta has had a change of mind, in February he affirmed Saliba would be part of Arsenal’s preseason team.

“He will come back for pre-season and he will be with us,” Areta said in February. “Hopefully he will come back after playing a number of games and his performance raising and his development progressing in the right way. That’s why we made that decision.

Saliba has only featured in a friendly game. (Photo by Stuart MacFarlane/Arsenal FC via Getty Images)

“I know that sometimes it’s difficult to explain or understand after the money that the club has spent trying to bring him in, to send him on loan.

The 20-year-old had an impressive short loan spell at Nice and looked certain to be part of Arsenal’s squad for the new season especially after the departure of David Luiz.

Now the youngster is set for a third loan spell. He joined from Saint-Etienne in 2019 for £27m and is yet to make a competitive debut.

Saliba signed a 5-year contract with Arsenal and it looks like he will spend 3 of those years playing away from Arsenal. This has left many fans frustrated with some believing Arteta is sabotaging the talented defender’s career.

Arsenal to announce second signing this week after wrapping up deal