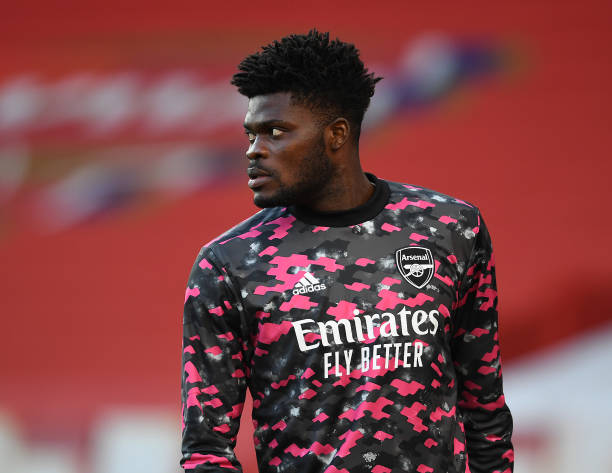 Arsenal midfielder Thomas Partey was in the starting eleven that played against Chelsea in Sunday’s friendly game but he was however forced to come out before the end of the game after picking up an injury which made a lot of fans worried as he limped as he was leaving the pitch. The Arsenal fans have however received some good news on the welfare of Thomas Partey ahead of their new season.

Thomas Partey has been at Arsenal for just one season and the fans were not able to fully enjoy his first campaign at the club as he was affected by constant injuries even though he had never had these sort of challenges in the past. The fans are looking forward to finally seeing him play a full season with no interruptions but what happened yesterday has kept them anxious on whether he will be available at the start of the 2021/22 season.

The Arsenal fans have however received some good news on Thomas Partey as he was apparently pictured at Paddington and that he was walking normally with no limping.

This provides the fans with hope that Thomas Partey will likely not be out for long but they will however also be looking forward to what the tests done on him today say, as Mikel Arteta said directly after the game that the injury wasn’t looking good.

“He’s going to have a scan tomorrow and at the moment it’s not looking good because he was in pain and he could not continue which, for Thomas, is pretty unusual.” Mikel Arteta told Arsenal Media after the game.