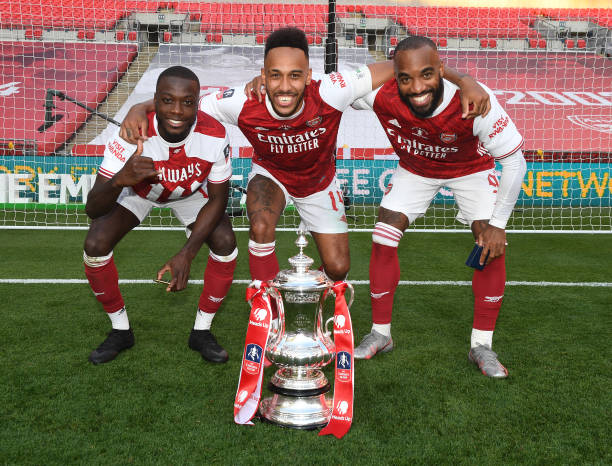 Constantly sitting on the bench and having very little playing time is a huge frustration for many football players.

It is even more frustrating if you were once in the starting team and suddenly you’ve been relegated to the bench for reasons best known by the coach.

This has been the case at Arsenal with only the Premier League and a few games in the Carabao Cup this season, several players have been deprived of playing time.

Despite this situation, these players have kept a cool head, at least for now.

For the majority of Mikel Arteta’s tenure, Lacazette has had to play second fiddle with Pierre-Emerick Aubameyang preferred as the central striker.

Lacazette hasn’t been in the spotlight given his situation and he has managed to get himself back into the starting eleven and earned the captaincy role.

Although his contract will expire next summer, the Frenchman has shown commitment whenever on the pitch.

Pepe has failed to meet expectations, consistency has been his issue. Frustrating for the Ivorian international is that Mikel Arteta has opted to bring in Eddie Nketiah ahead of him.

😂 We’re playing Eddie, who has no plans of staying, ahead of our record signing 🤦🏾‍♂️ https://t.co/Euf9t8rSD4

His time at Arsenal may be over but he has kept himself off the media hullabaloo and behaved professionally.

Leno was Arsenal’s number one for three seasons and was Arteta’s first choice when faced with the decision regarding Emiliano Martinez.

Despite the initial skepticism, Ramsdale showed he is the more assertive goalie and fits in Arteta’s style of play.

“I’m not seriously thinking about that yet. I feel comfortable at Arsenal and in London.” Leno said regarding his future.

“Only if nothing changes in my situation by winter would I have to think about things, what option do I have, how can I continue?

“But I’m concentrating on my work in training, I can’t commit to anything else at the moment.”