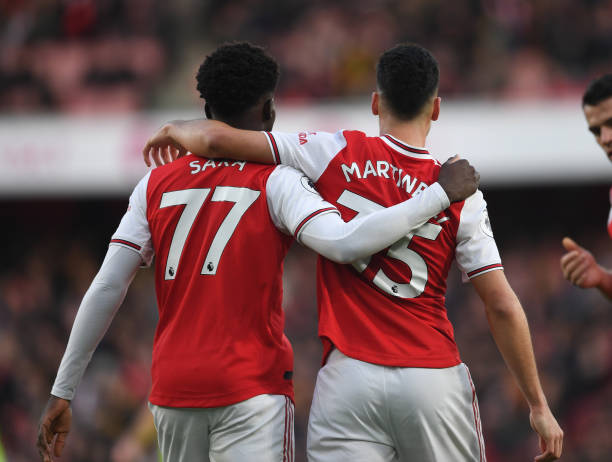 ( Saka and Martinelli / Photo via Getty )

Arsenal will on Thursday night be welcomed at the Molineux Stadium by Wolverhampton for their first game since we went into the international break and this will be a game that the North Londoners will wish to prove that they made the right decision to not panic buy in the last moments of the January transfer window. Here’s Arsenal’s likely lineup to be used by Mikel Arteta with all eyes on Bukayo Saka and Gabriel Martinelli as they have been on form for a while.

Aaron Ramsdale will start in goal for Arsenal against Wolves since he is the Premier League goalkeeper after winning it from Leno.

There are some doubts that Tomiyasu might not be available but we believe him and Tierney will be in the full back positions while Gabriel and White play as centre backs on Thursday.

Thomas Partey and Granit Xhaka will start as a midfield duo against Wolverhampton.

Gabriel Martinelli and Bukayo Saka will start on the flanks while Martin Odegaard will play in the no.10 role since Mikel Arteta likes using the 4-3-1 formation.

Alexandre Lacazette has been good this season in some periods and Arteta will hope that he is at his best on Thursday when the face Wolves.

Lacazette hints at the next possible Arsenal captain