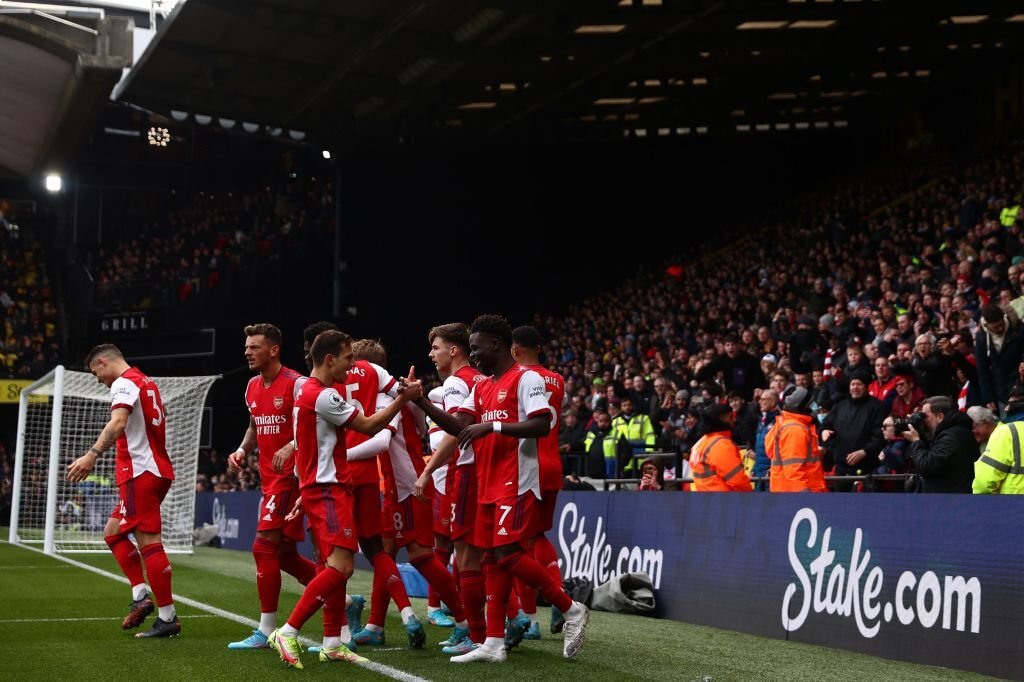 Martin Odegaard gave Arsenal the lead in the fifth minute after playing a one-two with Bukayo Saka to open up space on the left, Odegaard sliced a shot into the bottom corner to put Arsenal ahead.

Watford equalized six minutes later, a spectacular overhead from Cucho Hernandez who wasn’t challenged by the Arsenal defence that was static for that goal.

The lead was eventually restored their lead in beautifully. Saka won the ball back from a Watford player who was caught out outside the penalty box. He passed the ball to Lacazette who laid off neatly for Saka to smash into the top corner.

Bukayo Saka celebrates scoring the 2nd Arsenal goal during the Premier League match between Watford and Arsenal at Vicarage Road on March 06, 2022 in Watford, England. (Photo by Stuart MacFarlane/Arsenal FC via Getty Images)

Now with the lead, the Gunners had control over the game and managed to keep possession for the rest of the first half.

Arsenal got that important third goal early in the second half that put them in the driving seat. A quick throw-in from Saka instigated by Arteta on the touchline is worked through Cedric, Odegaard and Lacazette to Martinelli with a series of one-touch passes. The Brazilian lets it bounce in front of him before hitting it on the half-volley, firing his shot into the far top corner to make it 3-1.

Gabriel Martinelli celebrates scoring the 3rd Arsenal goal during the Premier League match between Watford and Arsenal at Vicarage Road on March 06, 2022 in Watford, England. (Photo by Stuart MacFarlane/Arsenal FC via Getty Images)

The Gunners could have scored one or two more goals, a good opportunity for Lacazette to grab his third assist of the game however, Odegaard unselfishly played it back for the Frenchman who unfortunately skied his shot.

A slip in concentration from the Arsenal backline gave Watford a lifeline. Watford lobbed through a ball for Sissoko who darted into the Arsenal box. Ben White was unsuccessful at closing down his opponent with his challenge and Sissoko slipped past him and slotted the ball into the far corner to make it a frantic last 5 minutes.

Arsenal managed to see out the rest of the game and got themselves the important three points that take them up to fourth as things stand.