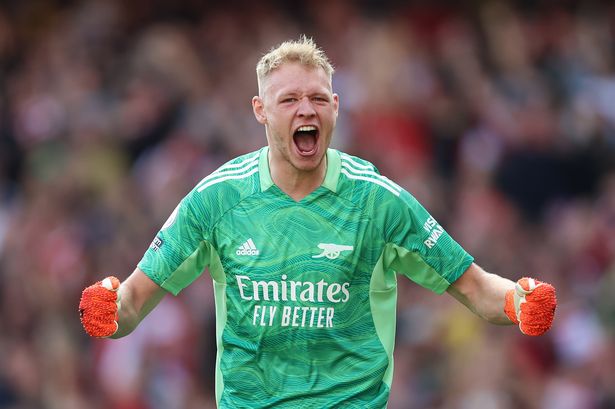 Arsenal completed the signing of Aaron Ramsdale from Sheffield United for £30million in the 2021 summer transfer window and he has turned out to have been one of their best signings in years as he has been impressive for the North Londoners in this 2021-22 campaign. Bernd Leno has revealed the big warning that Arsenal boss Mikel Arteta gave him in the final stages of his coming to the Emirates Stadium.

There was a lot of debate on social media and football talk shows on whether it was right for Arsenal to splash £30million on Aaron Ramsdale when he had got relegated twice but the young English goalkeeper has proved everyone wrong. It was not known whether he would automatically become the first choice goalkeeper when he got signed but he however took his first chance given to steal the no.1 spot from Bernd Leno.

Aaron Ramsdale has now revealed that he was warned by Mikel Arteta before he arrived at the Emirates Stadium about his possibility of playing or becoming the first choice goalkeeper. Ramsdale was asked whether he was over the moon with how his current career is going and he replied while revealing the Arteta warning.

“Yeah definitely, I didn’t think when I signed that I’d be in straight away. The manager was upfront with me and said ‘it might take you a year, it might take you six months but we don’t see you as a number two, it just depends on how the teams doing’.” said Ramsdale as per The Mirror.

“I think thankfully for me we were in a tough moment at the start of the season and I got thrown in and I managed to just play with some of my confidence and yeah, stayed in the team. I think it always helps when, obviously, Bernd Leno is a top keeper and a professional, it’s so much easier to stay switched on than someone that sort of just tosses off.”

Granit Xhaka speaks out on who should be Arsenal’s captain

Arsenal’s kits for next season and their release dates revealed