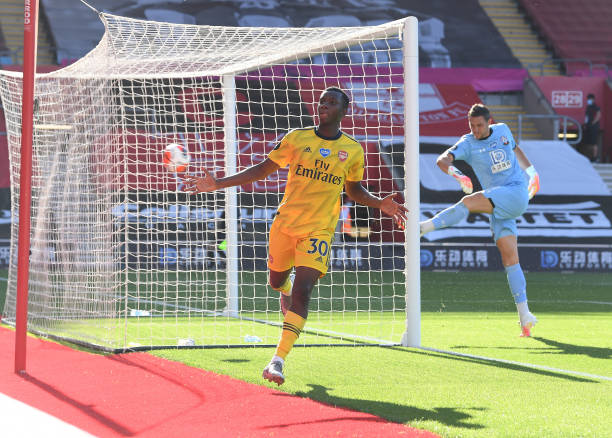 Arsenal striker Eddie Nketiah is in the last few weeks of his current contract at the Emirates Stadium as his deal expires at the end of June and nothing has yet to be officially announced concerning his future. There has been a lot of speculation on the future of Nketiah at Arsenal since the season begun but it’s however intensified in the last few weeks due to his performances.

Eddie Nketiah had spent the last few months on the Arsenal bench with most supporters with the approval of him not getting a renewal since he wasn’t exactly shining and it seemed like they really didn’t need him. Things have however changed in the last months of the season as the departure of Aubameyang and poor performances from Alexandre Lacazette saw him get a nod, and he impressed everyone.

A report by The Daily Mail has confirmed that Arsenal have decided to try for the last time to convince the young Englishman to stay at the Emirates Stadium although he had denied their previous approaches in the last few months. It claims that Nketiah had come to terms with the decision to leave Arsenal this summer but that him getting promised minutes next season would be able to influence his decision.

Eddie Nketiah already has possible suitors as it is reported that clubs from France and Germany are interested in signing him for free when his contract with Arsenal expires at the end of June. It will be interesting to see what he decides in the next couple of weeks.

Arsenal receive good news in their pursuit of Lautaro Martinez