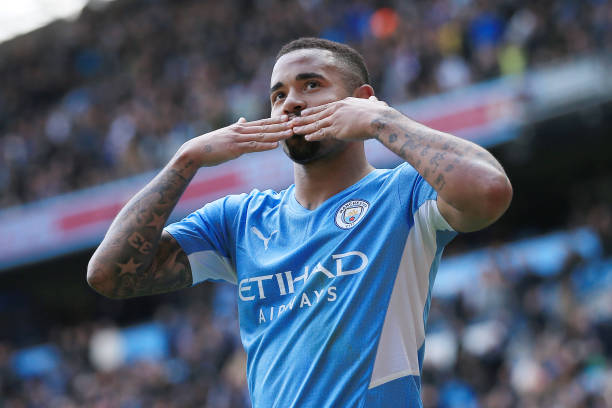 It is no secret that Arsenal will in the summer transfer window sign new strikers since they will in one year lose Aubameyang, Lacazette and Nketiah, and it’s been highly reported that they have identified Gabriel Jesus as their perfect candidate. It has now been reported that Manchester City have set an asking price for Gabriel Jesus who is expected to leave City this summer.

Gabriel Jesus has been in fine form this season and he has put most clubs on alert since its believed that he wants to leave Manchester City in this upcoming summer transfer window, and Arsenal seem to be the front liners for his signature as its claimed that the North Londoners might have already agreed personal terms with him hence only the two clubs needing to also meet to negotiate on fee.

It is now reported as per Football.London that Manchester City have set an asking price of £40million for Gabriel Jesus for any club that is interested in him. It is not known whether Arsenal would be happy with this price or if they would find it costly since they will need to buy two strikers but Mikel Arteta will be hoping that his side finishes in the UEFA Champions League spots so that their budget gets boosted with the qualification money.

Arsenal’s current strikers, Alexandre Lacazette and Eddie Nketiah will leave at the end of June since it seems like the club will not renew their contracts, and so it is very likely that the gunners will be willing to match the asking price of Manchester City for Jesus as Arteta seems to like him as most reports say he had a good relationship with him when he was still at the Etihad Stadium.

Arsenal receive good news in their pursuit of Lautaro Martinez