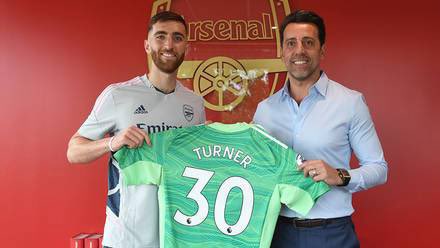 Arsenal have announced the signing of Matthew Charles Turner who is commonly known as Matt Turner from New England Revolution and he becomes the third summer signing of the gunners. The gunners have shown to be very active in this summer transfer window on a level never seen before as they are aiming to complete most of their transfer business before the start of the pre-season.

Arsenal’s new signing is Matt Turner is a goalkeeper and it’s likely that he might be Mikel Arteta’s second choice goalkeeper since Bernd Leno might be on his way out of the Emirates Stadium in this summer transfer window since he wants to be playing in a squad next season to get a chance to get in the German national football team that plays in the Qatar World Cup.

“We are delighted that Matt is joining us. Matt is a goalkeeper with established qualities and experience, who will be a great addition to our squad. ” said Edu Gaspar as per Arsenal Media.

“We identified Matt some time ago and worked hard to ensure that his transfer was complete so he could join us in time for our pre-season in July. We now look forward to Matt joining us, settling into his new home and working ahead of next season.”