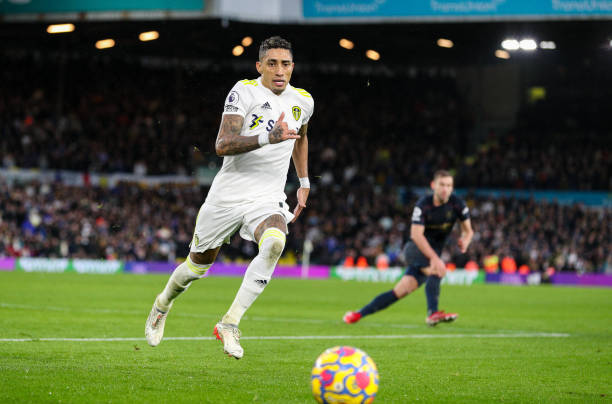 Arsenal is in the transfer market for many positions including the flanks and they seem to have identified Leeds United winger Raphinha as a player that would fit well into Mikel Arteta’s playing style that he wants to continue into next season. There has been a lot of speculation on Raphinha’s future in recent times and Leeds United has now reportedly set an asking price for their player.

Arsenal seems to have included adding a winger to the squad as one of their main priorities for this summer transfer window since it looks like Nicolas Pepe might be on his way out before the end of this window. There has been some reports linking Leeds United winger Raphinha with a move to the Emirates Stadium and a new report has now revealed that his club have now set an asking price for their prized forward.

A report by Daily Mail has confirmed that Leeds United have set an asking price of £65million for Raphinha since he is one of their best assets in their squad. The report however claims that Arsenal have already had a low bid for Raphinha rejected but that they will soon submit a second one that will be nearer to £50million.

It will be interesting to see what happens next week since it looks like it will be very crucial seven days for the gunners as they are trying to sign Manchester City striker Gabriel Jesus and Leeds United’s Raphinha at the same time.

REVEALED: The details in the deal that will bring Gabriel Jesus to Arsenal