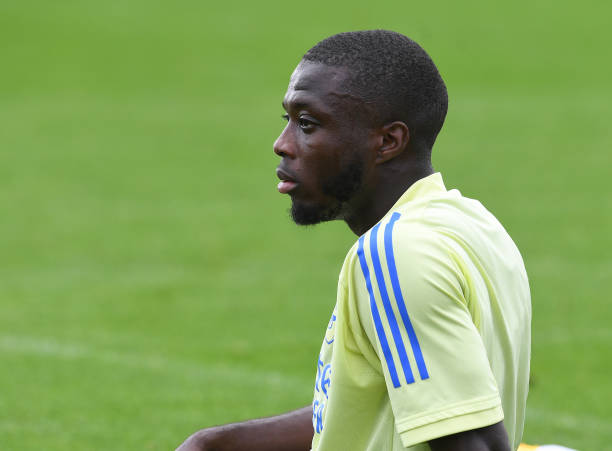 Arsenal has not made many sales yet as the summer transfer window just opened a few days ago and so we are going to take a look at three players that the gunners will likely sell or loan before the end of the, window.

Arsenal splashed £72million on Nicolas Pepe a few years ago hence him becoming their record signing and many thought that this would be the signing that would take the gunners to the next level but he has however turned out to have been a poor, signing. Nicolas Pepe currently fails to start over young players such as Martinelli and Saka as seen last season because Mikel Arteta has lost trust in him.

Arsenal will definitely try to sell him off this summer as they have already started getting linked with possible replacements and they will just count their losses, and get any amount they can get instead of having him on bench next season.

LONDON, ENGLAND – APRIL 23: Bernd Leno of Arsenal during the Premier League match between Arsenal and Everton at Emirates Stadium on April 23, 2021 in London, United Kingdom. Sporting stadiums around the UK remain under strict restrictions due to the Coronavirus Pandemic as Government social distancing laws prohibit fans inside venues resulting in games being played behind closed doors. (Photo by James Williamson – AMA/Getty Images)

Arsenal goalkeeper Bernd Leno has found himself as Mikel Arteta’s second choice goalkeeper after Aaron Ramsdale stole the no. 1 spot from him last season and since he will hope to be in the Qatar World Cup, he will be forced to leave the gunners to go to a club that will get him enough game time.

Bernd Leno has already been linked by concrete sources with a move to Fulham in this summer transfer window and so this is a deal that will definitely happen. The interest from Fulham has also been confirmed by his agent and so it will be interesting to see what happens.

Lucas Torreira was loaned to Serie A side Fiorentina last season since he was not in the plans of Mikel Arteta and he had a fantastic campaign in Italy as that club now wants to get him permanently. Lucas Torreira has totally failed to settle in England and he has been open about this but Fiorentina have had difficulties in getting enough funds to sign him from the North London club.

Fiorentina will definitely try to sign him later on in the summer transfer window after their first disrespectful bid of €7million was ignored by Arsenal.

Report: Arsenal about to complete signing of highly rated winger this week

REVEALED: The latest on Gabriel Jesus’ move to Arsenal