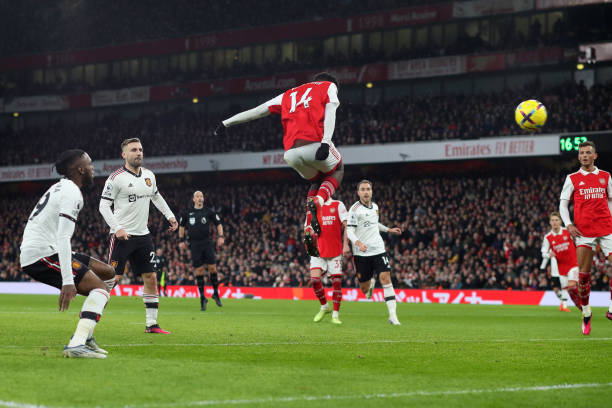 It was a thrilling game today as Arsenal and Manchester United put on an action-packed 90 minutes at the Emirates Stadium. Marcus Rashford’s stunning strike in the 17th minute opened the scoring but could not be held onto for long, as Eddie Nketiah equalised just seven minutes later.

The second half started with another incredible goal, as young winger Bukayo Saka curled one into the bottom corner from range to give Arsenal the lead once more. However, it was once again a fleeting joy for Arsenal fans as Lisandro Martinez quickly finished from close range to level things up again.

As both teams pushed for a winner late on, Nketiah evaded his marker in the box and nodded home the ball four minutes before full-time to get his second of the match and secure all three points for Arsenal. This dramatic win leaves Arsenal five points clear at the top of the Premier League table and means that Mikel Arteta’s side have now shown that this is their year to win the most sought out trophy in English football.

Chelsea 0-1 Arsenal: Match Report as Arsenal go back on top after win at Stamford Bridge