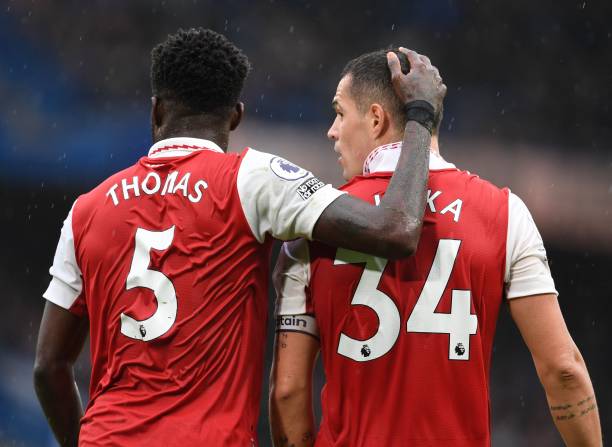 ( Xhaka and Partey / Photo via Getty )

Arsenal are set to face Manchester United on Sunday at the Emirates Stadium, and will be looking to make it four wins out of their last five games in the Premier League. The Gunners have been in excellent form lately, with a largely unchanged squad since the World Cup ended.

Mikel Arteta has been able to field a consistent starting line-up week in week out with minimal changes being made from game-to-game. It is predicted that this consistency will remain for Sunday’s fixture against Man Utd, with Arteta opting for an attacking 4-3-3 formation. Aaron Ramadale is expected to once again be chosen between the sticks after some impressive performances throughout the season.

Accompanying him along Arsenal’s defensive line is likely to be France international William Saliba at centre back alongside Gabriel Magalhaes; while England defender Ben White and Ukrainian Oleksandr Zinchenko should fill up Arsenal’s full back positions respectively. Veteran Swiss midfielder Granit Xhaka is likely to keep his place within the midfield three alongside captain Martin Ødegaard and Partey.

All eyes will be on Thomas Partey and Granit Xhaka because the gunners were without the Ghanaian international in their defeat to Manchester United last year, and so they will hope that these two impress since Casemiro won’t be in the game.

The front three is also likely to include two young English talents in North London: Gabriel Martinelli and Bukayo Saka should play at either side of Eddie Nketiah – all three are bursting with pace and skill which could cause chaos amongst United’s back line on Sunday.

Odegaard speaks out on Arsenal’s match against Manchester United