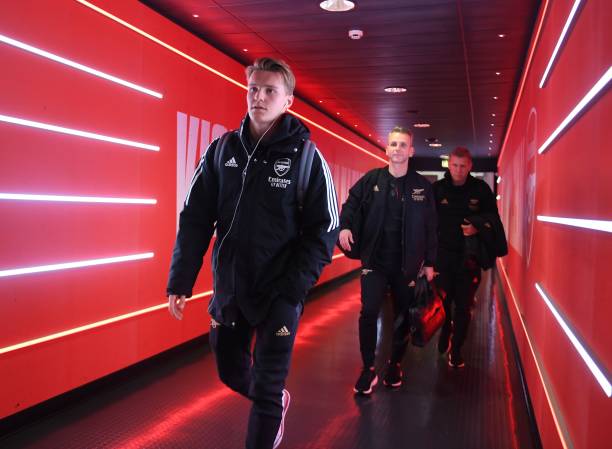 This Sunday sees one of English football’s fiercest rivalries reignite when Arsenal host Manchester United at the Emirates Stadium. There will undoubtedly be high stakes and expectations come match-kick off, but Arsenal midfielder and captain Martin Odegaard has a different set of aims going into the fixture.

The 24-year-old Norwegian star who joined the gunners some time back is now a Captain at the club and he is relishing the prospect of Sunday’s encounter against Manchester United. Speaking to the media, he was full of respect for the Red Devils, acknowledging that they have been playing exciting football under current manager Erik Ten Hag:

“Manchester United are obviously playing very well. I’ve watched them a lot lately and they look to me to be getting better and better this season. Their coach is a good one who I know from his time in Holland with Ajax, and his sides always play good football.” said Odegaard as per Arsenal Media.

Odegaard recalled their previous meeting earlier this campaign, where despite some good spells controlling possession, the gunners left Old Trafford with zero points after losing 3-1 to the Red Devils.

“So yeah, they’re doing well, but we must also remember the match at Old Trafford earlier in the season. I felt that day we controlled most of the game and I felt we deserved a better result in the end. This time we want to show some more discipline, to control the game for 90 minutes and not just small periods. It will be a tough game but we’re ready for itand we are feeling confident.”

Odegaard clearly believes in this Arsenal side’s capability of competing against anyone on its day; no matter how daunting their opposition may appear on paper.