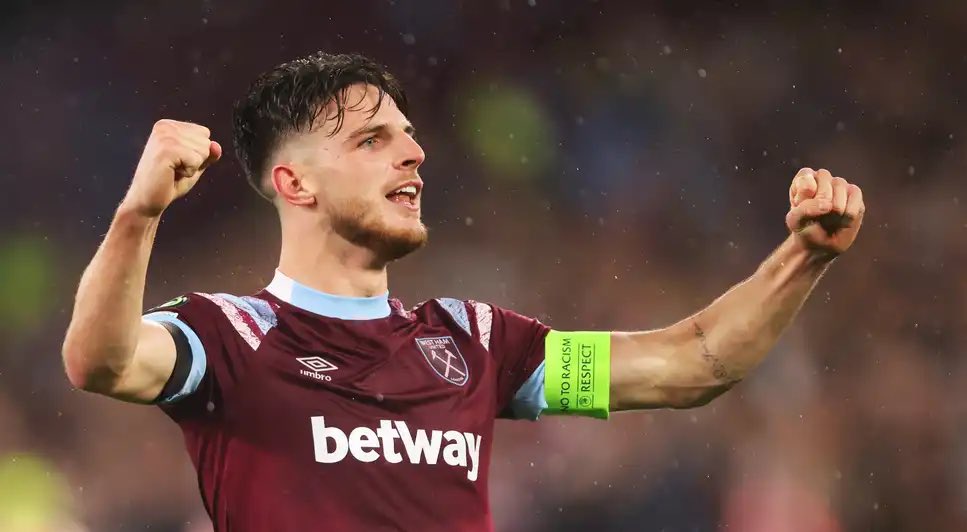 Arsenal have made West Ham and England midfielder Declan Rice their top target for the summer transfer window.

Reports state that Arsenal are confident that a deal can be done for the 24-year-old who is valued at around £85m.

However, the Gunners will have to go head-to-head with Chelsea who have been long-term admirers of Rice. Manchester City and United have also previously shown interested in the West Ham skipper.

🔺 EXCLUSIVE: Arsenal have made Declan Rice their top target this summer and are growing in confidence that they can beat Chelsea to his signature https://t.co/6Gq0NVFCmj

Arsenal unfortunately missed out on Mykailo Mudryk who was the number one target for the January transfer window after. The Ukrainian winger was swooped by Chelsea after they met Shakhtar’s €100m valuation.

The transfer chiefs led by Edu will have to act swiftly when negotiating with West Ham to avoid a potential hijack and secure their target.

Rice is open to joining Arsenal and keen on competing for trophies and playing Champions League football.

“One hundred per cent, I want to play in the Champions League,” Rice said in December.

“For the last two or three years, I’ve been saying that. I’ve been playing consistently well for my club and I feel like I really want to keep pushing. I see my friends here who are playing Champions League and for big trophies.”

Declan Rice is the only player in the Premier League with 20+ in the following metrics:

And he's won possession more times than any other player in the division. 👍 pic.twitter.com/O5FfFC4F6b

Rice’s contract expires in the summer of 2024 and the 24-year-old has so far rejected three offers to extend his stay at the east London side.

Arsenal’s new transfer target Raphinha opens up about his future