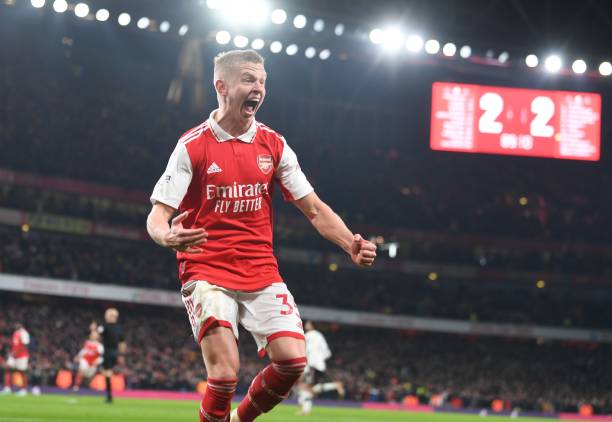 Oleksandr Zinchenko was one of Arsenal’s best players on Sunday when they handed Manchester United a 3-2 loss at the Emirates Stadium. The 26-year old left back, who joined Arsenal from Manchester City in 2022, showed experience beyond his years with his composed defensive play and impressive passing range.

After the match, Zinchenko spoke to Premier League TV about how he settled in to the Arsenal squad and became an important leader in the dressing room. Revealing that when he first arrived at the club, some of his new teammates laughed off his suggestion of trying to win the title.

“To be honest, when I had just arrived, the quality I saw … Obviously I knew the Arsenal team, I knew all of them before, but still I realised on the pitch we have everything to achieve big things,” said Zinchenko. “I started to speak in the dressing room, saying: ‘Guys, forget top three or whatever, we need to think about the title.’ Some of them were laughing but no one is laughing now and all of us are dreaming.”

He also warned caution despite their notable victory over United by expressing that City continue to remain a danger while hailing United’s recent resurgence. “But still there’s a lot of games to play and now you can see (Manchester) United is back. City, as always, is there. Let’s see what is going to happen, but we need to move step by step,” concluded Zinchenko.

The Ukrainian international has certainly put his mark on this Arsenal side since joining in the summer transfer window and Sunday was another reminder as he helped guide Mikel Arteta’s side into a big important win over Manchester United. With the help of Zinchenko’s experienced leadership both on and off the pitch combined with sheer quality on it – Arsenal could be dreaming about winning the Premier League title this season.