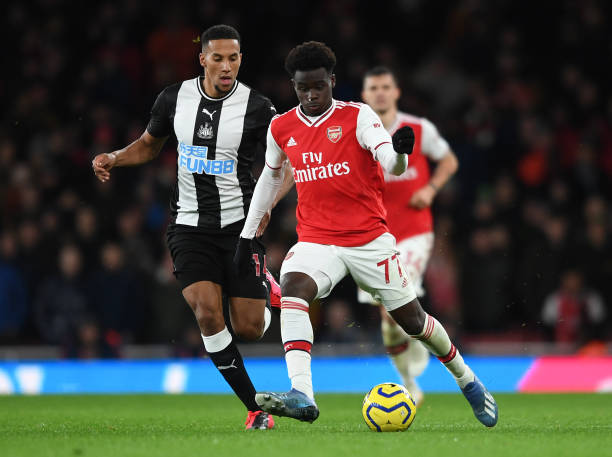 Arsenal will on Monday face Newcastle United at the St James Park and this will be a must win game for the gunners because their embarrassing 3-0 defeat to Tottenham Hotspur has put their UEFA Champions League aspirations at risk. And so we take a look at Arsenal’s early predicted Arsenal lineup to face Newcastle United.

Arsenal goalkeeper Aaron Ramsdale has been impressive this season and so he will be in goal on Monday when the gunners face Newcastle United.

Rob Holding got a red card in the North London Derby and although Gabriel got replaced due to an injury in the same match, it is likely that the Brazilian international will be available for the Newcastle game. So Arsenal’s back four will consist of Tavares, Gabriel, White and Tomiyasu.

Granit Xhaka and Mohamed Elneny might not have been at their best in their defeat to Tottenham Hotspur but Mikel Arteta will have no choice but to use them again in the game against Newcastle United.

Gabriel Martinelli might be replaced in the starting eleven by Emile Smith Rowe and so the young Englishman, and Saka might start on the flanks. So Arsenal’s attacking three will consist of Smith Rowe, Odegaard and Saka.

Eddie Nketiah failed to have an impact in the North London Derby but he will likely get another chance on Monday in the game against Newcastle United.