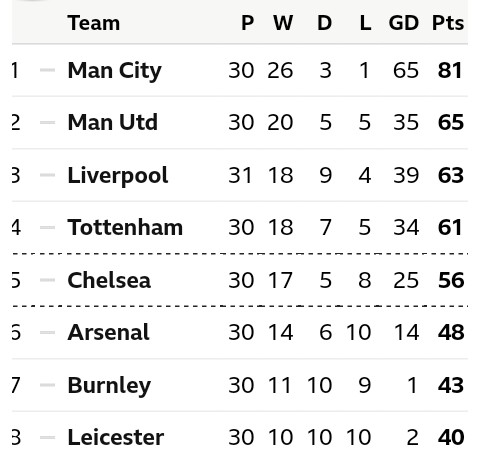 The gunners are currently in the 6th position on the English Premier League table and their chances of making it into the top four before the season ends just keep getting slimmer as weeks pass.

There are just 8 matches left before we can say goodbye to the 2016/17 campaign and things are getting intense at the Emirates stadium because it will be a big embarrassment to the North London club to miss the UEFA Champions League for two consecutive seasons, this isn’t just disappointing to the fans but the brands that sponsor the club will need the team to always play in top competitions.

It is no secret that Arsenal will not make it to the Premier League top four of they don’t win at least 7 of their next matches but those wins might still be useless if the teams above continue winning too, so the gunners will now need to focus on the Europa League as their only way of qualifation to next season’s Champions League.

In the remaining 8 matches, if the gunners need to reach the top four then they will need to first get past Chelsea who are with 56 points at the 5th position as well as Spurs who currently have 61 points which means that they have 13 points greater than Arsenal who have 48.

Arsenal missed out on this season’s Champions League campaign for the first time in 19 years but it seems they might not be able to make it to the Premier League top four which could make them miss out on UCL again if they don’t win the Europa League.

In Depth Review: Overview On Arsenal’s Next Four Matches

Arsenal Have Plenty To Celebrate After Watford Win