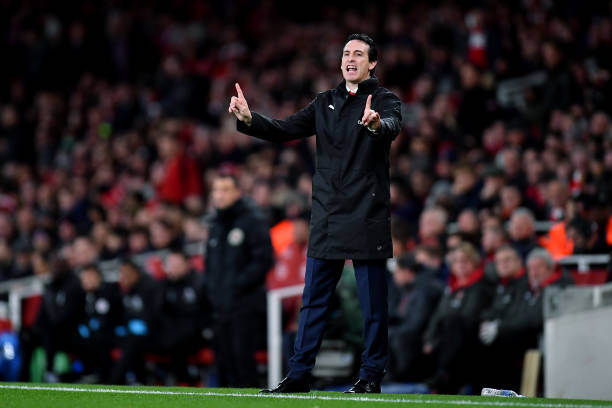 The gunners defeated Huddersfield Town 1-0 thanks to a late goal from Lucas Torreira but even though Arsenal collected all the three points, their performance showed that Unai Emery will always find it hard to get wins against teams that are very defensive. The gunners started off the match with the 3-4-1-2 formation because Unai Emery wanted to see if Aubameyang and Lacazette combination would work wonders.

The Arsenal fans have for long been urging Unai Emery to use both of them as central strikers since one playing on the wing doesn’t always work out. Both Aubameyang and Lacazette have said that they like playing as centre forwards so Unai Emery gave them their wish on Saturday but they disappointed him in the first half because they missed clear chances which could have helped the gunners to win the game comfortably.

Arsenal boss Unai Emery then substituted Lacazette and Stephan Lichtsteiner at the start of the second half but we however haven’t known why the gunners boss decided to take out the Frenchman because he was playing well even though he missed a great chance in the first 45 minutes. The first half was very sloppy for Arsenal because they failed to make their usual passes from the back since Huddersfield Town were putting pressure on them.

Arsenal legend Martin Keown has revealed that he believes that the partnership of Aubameyang and Lacazette failed because of lack of creativity in the wide positions. The former Arsenal star said on the Match of the Day program.

“They played with two strikers, Lacazette and Aubameyang and you think that would form a good partnership but not if you’ve not got the creativity in wide positions. There was no one really looking for the ball.” said Martin Keown.

“The two strikers were basically looking in on the game and not taking part and in the final third they couldn’t find the necessary passes.”

Martin Keown also added saying that he gives credit to Unai Emery for identifying this problem at halftime hence bringing in Mkhitaryan and Iwobi so that they could put pressure on the Huddersfield Town side.

Unai Emery speaks out on his players diving in matches

Sampdoria sends a message to Arsenal fans about Lucas Torreira