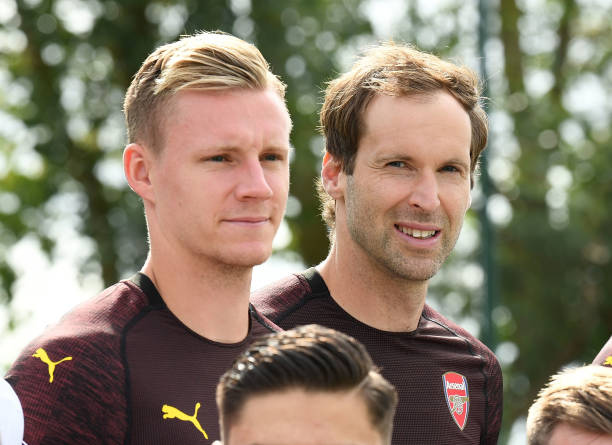 The gunners have three goalkeepers in their record books – Bernd Leno, Petr Cech and Emiliano Martinez. Martinez is obviously the third goalkeeper because he is the youngest among them but the competition to be Unai Emery’s first choice goalkeeper has been between Petr Cech and Bernd Leno.

Arsenal signed Petr Cech from Chelsea a few years ago and the Czech Republican international has been the first choice goalkeeper of the North Londoners in all seasons he has been at the Emirates Stadium except this one. Bernd Leno arrived at Arsenal this summer after Unai Emery decided to bring in fresh blood at the Emirates Stadium as he starts his reign in English football.

Petr Cech was Unai Emery’s first choice goalkeeper when the season begun but he sustained an injury which kept him out for weeks but when he came back, Bernd Leno had already impressed the coach and the fans hence Unai Emery making him his first choice goalkeeper. Cech has now been forced to be playing in competitions like Carabao Cup, UEFA Europa League and now probably today’s game against Blackpool in the FA Cup.

Petr Cech is an old well experienced goalkeeper but it’s fascinating how Bernd Leno has managed to get him on the bench but it’s probably because he’s now old. Arsenal boss Unai Emery recently faced the media and was asked about Petr Cech’s reaction to being benched by Bernd Leno and he told Arsenal Player.

“His (Cech) respect for our decisions is very big and for the other goalkeeper. His commitment has not changed with his new situation. I am happy because we need that respect between us.” said Unai Emery.

“Petr Cech has very big experience and he is continuing with very good performances and the most important thing is that each player can continue with his behaviour in different situations when they are in the squad.”