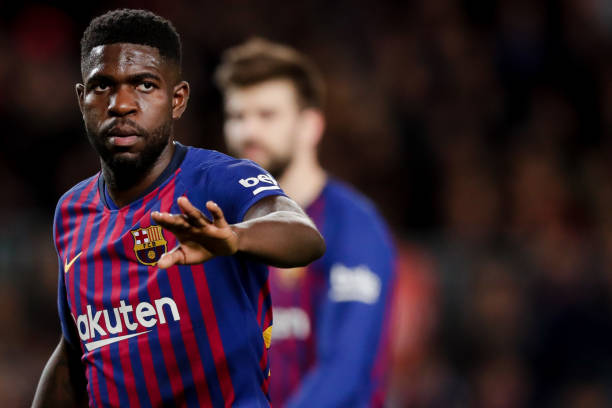 Samuel Umtiti has been linked with a move to Arsenal in the last few weeks and the gooners have got excited about the prospect of having the French centre back in their squad next season.

Most reports in Spain have claimed that Samuel Umtiti could possibly join Arsenal in the Summer transfer window because Barcelona feel that they can’t rely on him anymore because of constant injury setbacks. It is believed that Barcelona would sell Samuel Umtiti to Arsenal in the transfer window to sign highly rated Ajax centre back Matthijs de Ligt.

The gunners have however received bad news as a report from Spanish outlet Marca claim that Samuel Umtiti is not interested in leaving Barcelona in the summer and that he is ready to fight for a starting spot in the Barca eleven even though Lenglet has benched him for some time.

The Arsenal fans are hoping that Samuel Umtiti’s friendship with Alexandre Lacazette will be useful in their pursuit of the World Cup winning defender. We still have more than four weeks until the transfer window opens, so this does not confirm that it is impossible that Samuel Umtiti will not leave Barcelona in the summer.

Barcelona made a 4-4 draw with Villarreal last night and Samuel Umtiti was heavily criticized by the Barça fans for his performance. If he fails to get back his old form, this would give Arsenal more hope of getting him in the summer because Barcelona would be willing to let him go since he has been shocking because of injuries.