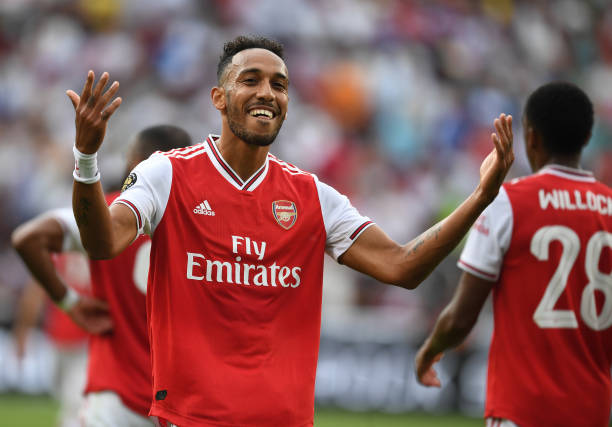 Pierre-Emerick Aubameyang was Arsenal’s top scorer last season, scoring 30 goals in all competitions but there has been talks of him getting sold this summer since the gunners are low on money after missing out on the UEFA Champions League spots.

The gunners faced Real Madrid last night in Washington DC and they lost the match in penalties but Aubameyang was impressive in this game as he scored Arsenal’s second goal. Arsenal’s pre-season tour of the US has ended and Unai Emery has a few weeks to improve his squad in the transfer window and one of the never-ending debates is if Aubameyang should be sold so that the gunners can reinvest in their squad.

Pierre-Emerick Aubameyang has in this transfer window been linked with a move to Manchester United but nothing has materialized from just being interest but the Gabon international did receive a big money offer from China but he reportedly rejected it as he said that he wants to be a legend at the Emirates Stadium.

Arsenal head coach Unai Emery faced the media after his side got defeated in the penalties by Real Madrid after the game ending 2-2 in the normal 90 minutes. He was asked if the club will sell Aubameyang and he confirmed that the striker will be staying.

“It’s not really in our mind. Not really. We are very happy with Aubameyang and we don’t want to sell him.” Unai Emery told Arsenal’s official website.

BREAKING: Arsenal reportedly made an impressive offer for Nicolas Pepe