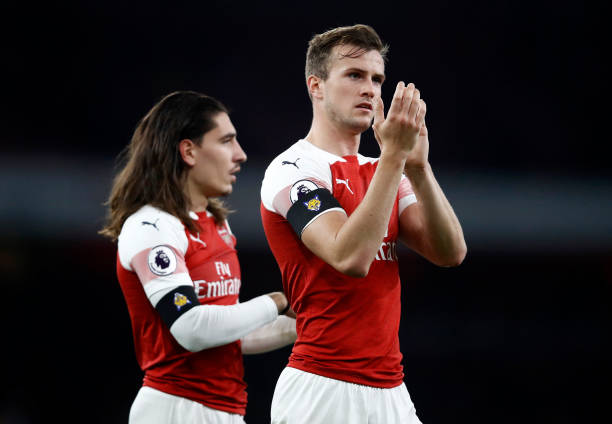 Arsenal will this weekend face Watford at the Vicarage Road and they will be hoping that they collect all the three points. Arsenal has had four players on the sidelines since the season begun but the gunners have however today received some wonderful news as Rob Holding has returned to full training.

As per a report from Arsenal’s medical team, Rob Holding is fully fit to play as he has returned to full training and he has already been tested in about three Under-23 matches, so he will for the first time this season be in the matchday squad if Unai Emery wants to include him. Rob Holding was an integral part of Arsenal’s defence last season before he got injured so his return could see either Sokratis or Luiz get benched.

Hector Bellerin has been on the sidelines for months now after he underwent a surgery in January in Arsenal’s 2-0 win over Chelsea and the club has confirmed that the Spanish right back is currently continuing with on-field rehabilitation as they hope that he could return to full training as soon as possible. Kieran Tierney was signed from Celtic with an injury and the club has confirmed that he is also at the same stage as Hector Bellerin so we will probably see them return at the same time.

Arsenal young defender Dinos Mavropanos has also been on the sidelines for some time now and he is also expected to return to full training in this month. The Arsenal fans will be hoping that Tierney and Bellerin come back as soon as possible since Unai Emery’s system relies on fullbacks.

Emery speaks out on when Tierney and Bellerin will start playing