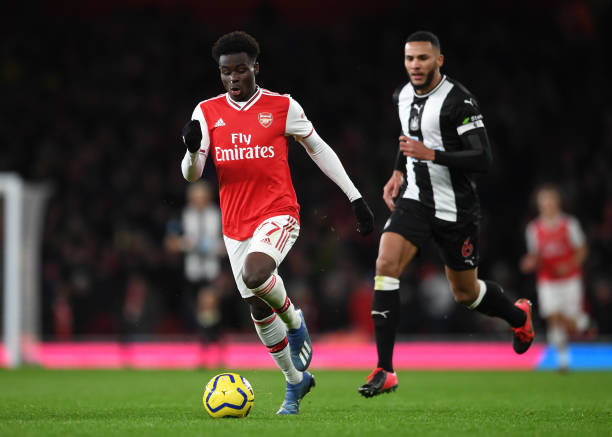 Arsenal youngster Bukayo Saka has been impressive this season and he was once again influential in the outstanding 4-0 win over Newcastle United on Sunday and this has made gooners start calling on the club to quickly tie him down to a huge contract.

Bukayo Saka has 18 months remaining on his current contract at Arsenal and his performances in the first team of the gunners has seen him attract interest from clubs such as Manchester United, Liverpool and Bayern Munich but the gunners will be looking to renew his deal to avoid losing him on a free or on a low amount if he enters into the final year of his deal.

Bukayo Saka has however revealed that he is calm at his contract situation and confirmed that his agent and the club have already started. He also says that he is just enjoying his football under Mikel Arteta.

“It’s for my agent. They’re sorting it out. Of course I’m enjoying my football, enjoying playing under the new coach so we’ll see what happens.” said Bukayo Saka as quoted by Football.London.

Bukayo Saka has been playing as a left back in the last few weeks due to the gunners having injury problems at the back but he has however played well in that position as he even got an assist in Arsenal’s 4-0 win over Newcastle United but he has however confirmed that he still wants to be a winger. Saka also spoke of how he currently plays as a winger in Arteta’s system.

“I’m playing sort of as a winger when we have the ball but without the ball I have to come back and work on my clearances, my heading and stuff I haven’t worked on my whole life. I feel like I’m doing ok right now” said Saka.

“I feel like my dream was always to be a winger, to affect games, score goals and get assists. For now I’ll do the job the manager asks me to.”