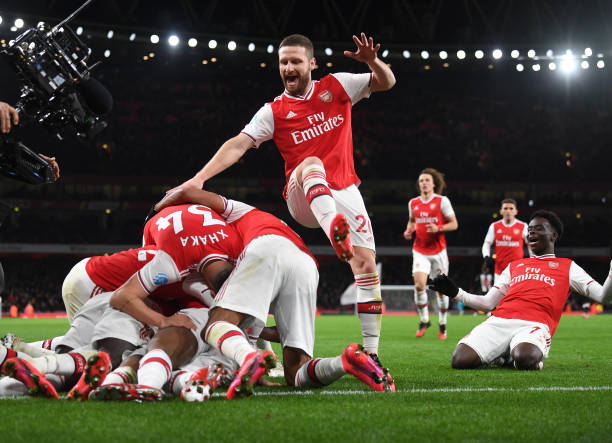 Arsenal have gone back to winning ways this evening after beating Newcastle United 4-0 at the Emirates Stadium thanks to goals from Pierre-Emerick Aubameyang, Nicolas Pepe, Mesut Ozil and Alexandre Lacazette. Mikel Arteta’s side had a phenomenal second half performance and the gooners will be happy to see that the team has shown signs of progress after a two-week break in Dubai. So we take a look at the talking points from the game.

Arsenal started the match well and as expected, they had most of the possession but they however looked like they wouldn’t be able to break down the deep block of Newcastle United hence the Magpies gaining a little bit of confidence in the few counter attacks they were having. Newcastle United looked to be dominant until the 20th minute but then the gunners grew back into the game and dominated for the full 45 minutes, but still failed to find the back of the net. Mesut Ozil and Dani Ceballos were very impressive in the first half as they sent in some wonderful goals to the forwards.

Arsenal came into the second half with more determination and Dani Ceballos almost sent Aubameyang through in the middle but the Gabon international failed to flick it into the back of the net. The gunners got another awesome chance after Pepe fizzled through the Newcastle United defence and set a great pass towards Nketiah but the 20-year-old failed to find the target.

Arsenal finally found the breakthrough after Nicolas Pepe sent in a great cross in the defence of the Magpies and Aubameyang headed the ball into the back of the net to make it 1-0 to the North Londoners in the 54th minute. The gunners found their second of the day just three minutes later after Bukayo Saka brilliantly got past a defender and then sent in a great cross which Nicolas Pepe finished off to make it 2-0. The Emirates Stadium was now buzzing as it’s been rare for them to get two nil leads this season.

Newcastle United looked very hopeless after the second goal went in and now started cheaply giving away the ball but they however almost went back into the game but Saint-Maximin’s shot hit the post. Lucas Torreira then later replaced Dani Ceballos who by the way had an incredible performance. Lacazette also replaced Nketiah.

Arsenal got their third of the day in the 90th minute thanks to a wonderful team move which saw Lacazette receive the ball in the penalty box and then flick it to Ozil who put it into the back of the net to make it 3-0. To make things even sweeter, Lacazette’s goal less run finally ended after Pepe found him in the penalty box and the Frenchman made no mistake but to put the ball into the back of the net. Mikel Arteta will now go home with a happy smile on his face and he will be hoping that he can build from this so that the gunners can go on a winning run.