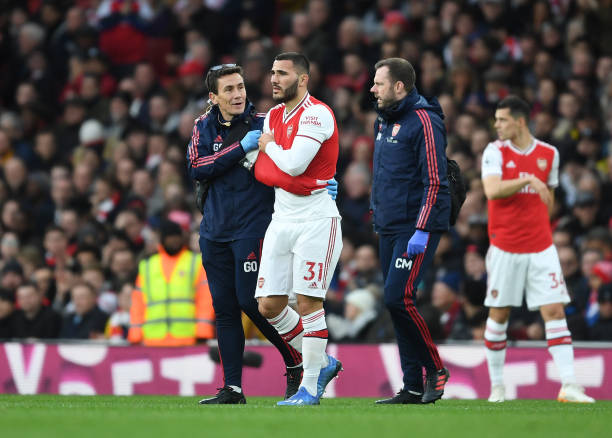 Arsenal will tomorrow welcome Olympiacos for the return leg of the UEFA Europa League and the gunners have today released the latest team news ahead of this game with updates about Kolasinac, Chambers, Tierney and Cedric.

Sead Kolasinac has struggled with injuries this season and the gooners were hoping that he would have a run of games starting with the game against Everton but he however picked up another injury and left the pitch while seemingly in pain due to his shoulder. The club has confirmed that Sead Kolasinac has indeed picked up a shoulder injury but they however don’t have a return date since other tests will have to first be done.

Kieran Tierney got injured in Arsenal’s 3-1 win over West Ham United in November and he has since then been on the sidelines but the club has confirmed that the Scottish left back will be back in full training at the end of this month. The gunners will be excited to see how Tierney performs under Arteta since he did show his brilliance at the start of the season.

Arsenal completed the signing of Cedric Soares from Southampton in the January transfer window but he is however yet to play for the gunners since he came to the club with an injury. The club has confirmed that he will also return to full training at the end of this month. Calum Chambers got injured in Arsenal’s 2-1 loss to Chelsea in January and his rehabilitation will of course take six to nine months as revealed by the latest team news from the club.