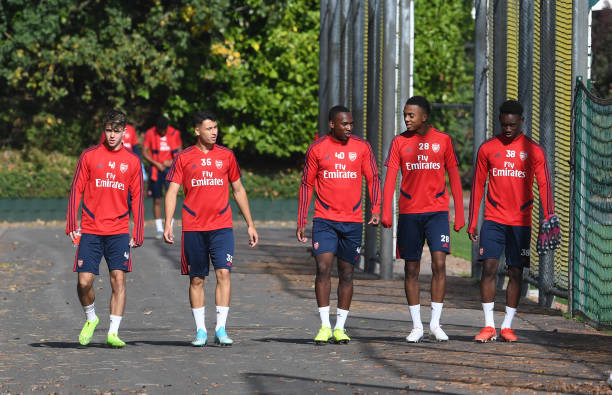 It is not a secret that Arsenal have quite a number of rising stars in their midst. This season fans have seen the rise of Bukayo Saka and Gabriel Martinelli joining Reiss Nelson, Eddie Nketiah and Emile Smith-Rowe.

Young players such as Matteo Guendouzi, Joe Willock and Maitland-Niles might have lost their form or position in the team however they cannot be written off. William Saliba will join the cast of youngsters at the Emirates soon.

A club like Arsenal will need such players given their constant low budget as well as a growing list of unsettled or ageing players. Young players also possess an escalating market value as well as untapped potential.

We take a look at the players who might soon get promotions from the academy to the first team;

Arsenal have another talented young centre-forward, the 18 year old is the top scorer and top assist provider for Arsenal U-23s with 10 goals and 4 assists in just 16 games. He is tipped to join Arsenal’s first team next season and provide competition for the likes of Martinelli or maybe replace Aubameyang or Lacazette who continue to be linked with exits.

Balogun in action for Arsenal U23

John-Jules like Balogun is another English centre-forward, he scored 5 goals and 2 assists before he was loaned out to League one side Lincoln City were he as scored a 1 goal in his 7 appearances. Fans might get to see more of him in the near future either on loan or in the first team.

Azeez has been labelled as one of the best players in Arsenal’s academy. Azeez who is 17 is able to play as a central midfielder or as a defensive midfielder and has shown skills and traits necessary to succeed in his position. He might be the player Arsenal need in their midfield or at least in a few years.

Azeez attempts a pass during a match

A skilful winger who can also play as an attacking midfielder,Tormey signed his first professional contract at the end of the 2016/17 season, but he’s since been plagued by injury. But his career appears to be back on track.

Primarily an attacking midfielder Coyle is able to play on both wings. He can score and assist as well as dribble around his opponents. His play style of play is similar to Alexis Sanchez.

The development and progress of these players will be down to Mikel Arteta, he will need groom the raw talent into stars using the coaching skills he has been praised for. No doubt Arsenal have untapped resources and a bright future.