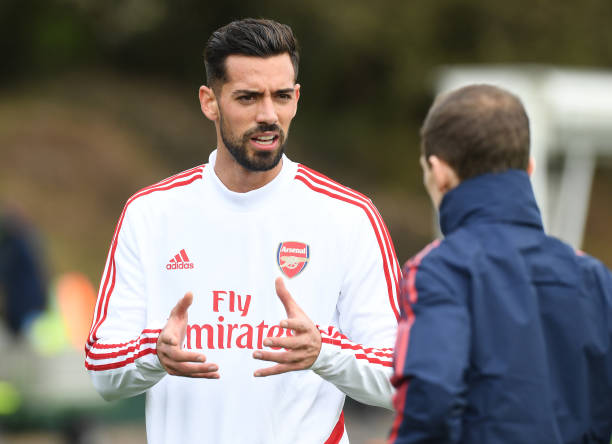 As Arsenal finally return to action in a few weeks some of the players will be under scrutiny.

We take a look at the players who will be in the limelight when The Gunners return to action.

The 28 year old Portuguese right-back is yet to feature for Arsenal since a £5m loan package was agreed with Southampton in January.

Cedric will get the opportunity to feature in either the Premier League or the Fa Cup and  he will now be looking to secure a long-term contract at Arsenal, with his spell on Southampton’s books over as his contract expires this summer.

Should he impress, Cedric would be a good option at right back and provide competition for Bellerin.

Cedric Soares is yet to feature for Arsenal

Arsenal manager Mikel Arteta is a fan of left footed central defender Mari and has been tipped to sign him permanently in the summer.

Unlike Cedric Soares, Mari has featured twice in victories over Portsmouth (Fa Cup) and West Ham (PL) and has impressed in both matches.

Mari will use the remainder of the season to convince Arteta that he is worth signing for a fee around £10m from Brazilian side Flamengo.

Xhaka was Arsenal’s captain until his nasty clash with the fans in a match with Crystal Palace last year.

Despite that incidence Xhaka isn’t a fan favourite and many have been calling for him to be sold due to his inconsistent performances, error proneness and his lack of agility.

However, he has been a regular ever since Arteta took charge and could use the remaining games to convince the hierarchy that he is worth keeping.

Arsenal continue to be linked with Thomas Partey, could his arrival be the endgame for Xhaka?

Many fans are well convinced Mustafi should be sold or should have been sold a long time ago the board as well had reportedly put Mustafi on the transfer list last season.

Just like Xhaka but probably worse Mustafi is inconsistent and has many countless errors in defence costing Arsenal points and even a Champions League position.

However ever since Arteta’s arrival Mustafi appears to have turned from made the “zero to hero” transformation.

He has featured often in Arsenal’s matches along side David Luiz and has been one of the player to benefit from Arteta’s appointment.

Mustafi will have to prove that he is really worth keeping in the remaining games rather than flattering to deceive.

Ceballos has featured the most compared to the other loanees.

Ceballos was signed by Unai Emery and then did superbly to fight his way into Arteta’s plans when he returned to full fitness at the start of the year.

But the Spain international appears determined to prove himself at his parent club and reiterated his desire to break into the Real Madrid squad.

Ceballos has impressed during Arteta’s tenure and Arsenal would like to extend his loan deal by a year as he is seen as a replacement for Aaron Ramsey.

Despite his desire to play for Real Madrid, they have put a £40m price tag upon him and there were rumours of him being involved in a swap deal with Aubameyang heading to Madrid.

The up coming games will be crucial to these player with their futures on the line and under observance.