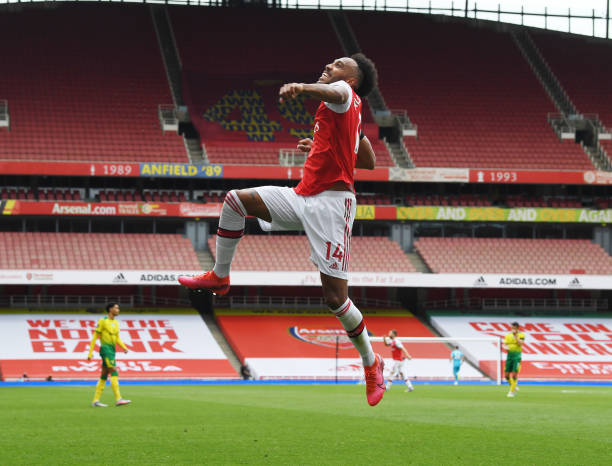 Pierre-Emerick Aubameyang has entered into the final year of his current contract at Arsenal and he is yet to agree to a new deal with the gunners and the Arsenal fans are always on the lookout for hints on if he will decide to renew. Aubameyang’s father has posted a message about his son after the win over Watford which saw the Gabon international score a brace.

Aubameyang’s current contract at Arsenal will end in 2021 and the gunners have in the last few months been reportedly trying to tie him down to a new deal but nothing has up-to now been announced as both the club and the player himself are not usually direct in the questions about the situation.

Aubameyang scored twice in Arsenal’s 3-2 win over Watford and the dad took to social media to congratulate his son on scoring yet another 22 Premier League goals in one season. The father of the striker also seemed to talk about the press claiming that they knew nothing about the contract situation hinting at the Gabonese striker probably staying at the Emirates Stadium since most reports from the media say that he could leave.

Many Arsenal fans have come out with their interpretation of the message by the father of their star striker but most believe that he could be hinting at possibly staying as some reports in the last few weeks did say that the hierarchy of the North Londoners has a great relationship with the dad, and so that is giving hope to the fans that a renewal could soon be announced.

Aubameyang has been linked with a move to many top European clubs such as Real Madrid, Barcelona and Inter Milan in the last few months and most reports claim that the 31 year old could be tempted to going there since they offer UEFA Champions League football and a great shot at getting trophies.

Report: Barcelona make new proposal to get Guendouzi while Arsenal get Coutinho