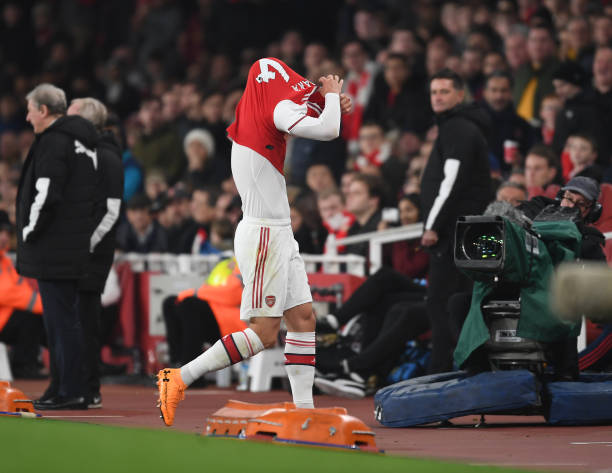 Arsenal midfielder Granit Xhaka had a scuffle with the Arsenal fans last year when he got substituted in the game against Crystal Palace and then got booed by the supporters as he walked out which then saw him also give it back to them by also making some gestures. This incident ended up costing him the captaincy as Aubameyang replaced him as he was the vice captain at that time.

Everyone believed that would be the end of Granit Xhaka’s career at Arsenal as him reacting like that for the whole world to see was very embarrassing for the club and left it with no option but to remove the captaincy from him. Xhaka was linked with a move away from Arsenal after that incident and the rumours surrounding his future intensified when the January transfer window opened.

Despite all that, Granit Xhaka stayed at Arsenal and has now started winning back the support of the fans as it looks like he is an important player in Mikel Arteta’s system at the Emirates Stadium. Xhaka has been speaking out on this incident and reveals that it wasn’t a good time for him and his family but says that he is proud that the club stood by him. The Swiss international also says that he can understand that emotions can sometimes be over the roof when asked about the abuse he received from the fans.

“Yes, it wasn’t a good time for me and my family after that game. It was also really unexpected for me and was very stressful for me, my family and the whole environment.” Xhaka told Blick.

“I also suffered a lot personally. But today I’m proud, yes. And thankful to my family and the club who always stood behind me.”

“I honestly never doubted myself. That I have the quality to play in this club and to perform well. It was a really difficult time, but also a time from which you can draw a lot of positive things in retrospect.”

There were reports that German based club Hertha Berlin were interested in him and he has confirmed that those reports were true and that he is however happy at Arsenal.