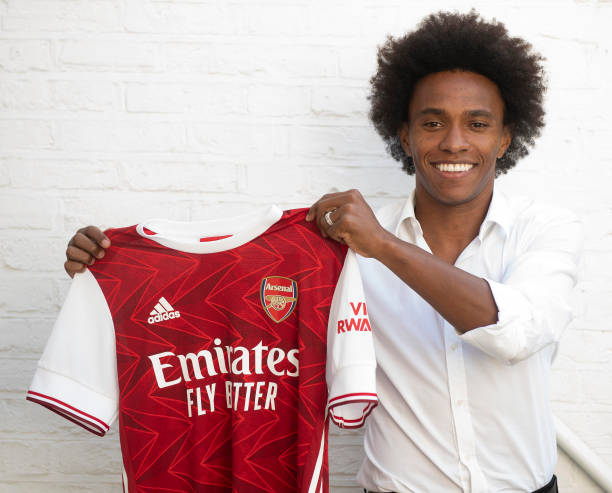 Arsenal have today finally announced the signing of free agent Willian Borges da Silva on a three year deal after many weeks of speculations as to where the Brazilian international would move to. Willian becomes Arsenal’s first 2020 summer signing and the fans will hope that there’s more to come.

Willian has spent the last seven years at Chelsea and he has been incredible there but he however decided to make a move to North London this summer as the gunners were ready to listen and accept his demands unlike The Blues that were reportedly not interested in offering him a new three year deal. Willian becomes the second Chelsea player to make a move to Arsenal in one year as David Luiz also abandoned the West Londoners to come join the gunners last summer and he even won a trophy in his first season at the club.

Arsenal announced the signing of Willian on their official website and it’s believed that the gunners were so determined to see this deal go through because they want the Brazilian international to bring his experience to the Emirates Stadium since they have a lot of young wingers that will need guidance. Willian’s arrival will also give the Arsenal youngsters time to develop without too much pressure of playing for the first team every week.

The Arsenal hierarchy through technical director Edu Gaspar also spoke out on the signing of Willian.

“I know him very well, since a long time ago because we’ve been working together for the Brazilian national team and of course I was following him because he played for another club.”

He has a lot of fantastic attributes as a “person, as a football player of course, his character. I’m 100 per cent sure that everybody in the dressing room, the fans, myself and Mikel will enjoy having Willian in our side.”

Arsenal receive a major blow in their pursuit of Dani Ceballos