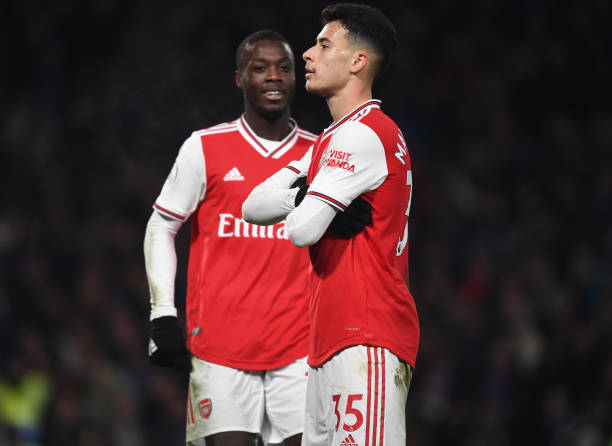 Arsenal will today go head to head with Everton at the Emirates Stadium and this will be a must win game for Mikel Arteta as he will want his squad to be in good form ahead of their important UEFA Europa League game against Villarreal. Arsenal will be without many players and we however take a look at their predicted lineup with all eyes on Gabriel Martinelli and Nicolas Pepe.

Arsenal goalkeeper Bernd Leno was given a rest last weekend and even though Maty Ryan didn’t do anything wrong in that game, the German shot stopper will take charge in this game as this will be a very hard game for the North Londoners.

Arsenal right back Calum Chambers will start in this game as it looks like he has proved to Arteta that he might be a better alternative to Hector Bellerin. Pablo Mari is also likely to come in the place of Gabriel who caused a penalty in the game against Fulham last weekend. So Arsenal’s back four will possibly consist of Xhaka, Mari, Holding, Chambers.

Dani Ceballos and Thomas Partey’s partnership will likely continue as Arteta seems to have been impressed with Granit Xhaka’s performance at left back.

Gabriel Martinelli and Nicolas Pepe will start on the flanks and with the absence of Aubameyang and Lacazette, all eyes will be on them to produce goals for the team in this game. Emile Smith Rowe will start as a central attacking midfielder.

Arsenal will in this game be without Pierre-Emerick Aubameyang & Alexandre Lacazette and so Eddie Nketiah will finally get a chance that he has waited for a long time.

Arteta reveals Arsenal’s biggest problem ahead of match with Everton