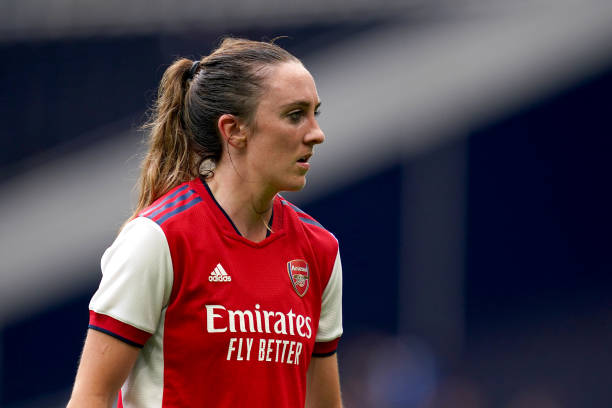 ( Arsenal star Lisa Evans / Photo via Getty )
Hello everyone, welcome to what I hope to make a little bit of a series. Today, I am going to be going over Arsenal’s men’s first team, women’s first team and academy and judge their standing in terms of the club, the first club which I am going to do. Arsenal currently has a staggering 26 players loaned out, 10 of which come from either their first-team squad. This article relates to their women’s first team.

If you would like to only find out about specific players, you can do so by using the ‘find’ option on your browser (Ctrl+F) and typing in their names. So, let’s dive right in and find out where these players are in the mind of Arsenal and Eidevall and whether they have a future with the Gunners.

Lisa Evans is a 29-year-old footballer, who can operate as a left-back, left-winger and as a striker. She is currently on loan at Women’s Super League club West Ham United, and has a staggering 91 caps for Scotland over the last 11 years. She was loaned out in the summer, after playing just 471 minutes last season for the Gunners, a 63% decrease from the previous season.

When Lisa Evans was originally signed by the Hammers, Oli Harder was pleased, stating, “We feel as though Lisa is somebody who adds a lot of value from an attacking aspect with her directness and her pace going forward. “She has the personality and drive that we’re looking for here, and we hope that she will be able to help us move forward this season.”

LONDON, ENGLAND – AUGUST 08: Lisa Evans of Arsenal during the MIND series match between Tottenham Hotspur and Arsenal at Tottenham Stadium on August 08, 2021 in London, England. (Photo by David Price/Arsenal FC via Getty Images)

Lisa Evans has been a more regular feature for the Irons, despite having an injury near to the start of the season. However, Lisa Evans’ contract expires at the end of the season, and due to that and Arsenal’s sheer amount of forwards, I think that she stays with West Ham on a permanent basis next season, unless personal circumstances prevent her from doing so. However, I believe there is still a small possibility of us resigning her.

Fran Stenson is a 20-year-old professional football player, who plays as a goalkeeper. She was on loan at Women’s Super League club Brighton & Hove Albion, and most recently had 6 international appearances for the England U17’s. She was loaned out in the summer, due to a lack of minutes at Arsenal. However, in November 2021, Arsenal’s official account tweeted, “Fran has been recalled from her loan spell at Brighton” along with a video with her at training.

Arseblog writer wrote about the situation from an Arsenal perspective, saying, “We had some injury problems with Lydia and we can’t be in a position with the number of games we have coming up where we only have one goalkeeper. That was part of the loan deal with Brighton, that she would stay there but not if we got into a situation where we needed to call her back due to numbers so that’s what’s happened.”

I believe that, due to Stenson’s contract, she’ll stay at Arsenal, but could either be trusted with the number 2 shirt, or could go out on another loan in either the WSL or Championship, in order to get game time. Williams has always been a short term stop gap, and Stenson was always the plan.

Anna Patten is a 22-year-old player, who typically plays as a right-back. She is currently on loan at Women’s Super League club Aston Villa, and most recently had 7 international appearances for the England U21’s. She was loaned out in January, due to a lack of game time.

Patten has had a bit more game time at Banks’ Stadium, getting 298 minutes more in her first 4 months at Aston Villa than in her 18 months at Arsenal since the summer of 2020.  When she was asked about her loan move to the Villans, she said, “It seemed like the right step to come to a club that will help me develop greater as a player and get those minutes.” “The coaches have been in and out a bit, but this week, we’ve started with everyone and it’s really starting to take shape.”

Anna Patten will probably come back to Meadow Park, as the Gunners will look to start building long-term from a season which may include no trophies whatsoever. It’ll be interesting to see Patten at Arsenal next season, especially if she manages to take the starting spot.

Halle Houssein is a 17-year-old footballer, who typically plays as a central midfielder. She is currently on loan at Women’s Super League club West Ham United, and is the captain of the England U18’s squad. She was loaned out in January due to a lack of experience in the women’s game.

When the deal was initially completed, Olli Harder seemed happy, with the manager stating, “We’re really pleased to welcome Halle to West Ham United. Arsenal have done a great job so far in developing a good young player and we feel as though we can provide Halle with the opportunity to take the next step in her development. She’s a young English talent that’s from the local area, and that fits firmly into our ethos of developing players from within our community.”

I think that this is an interesting one, but it’s likely that Houssein will either get a move away or will go out on another loan deal. She has been limited to cameos off the bench for West Ham, only playing 18 minutes so far this season, so I think that the Gunners will want her to have more game time, which could mean turning to the Championship.

Viktoria Schnaderbeck is a 31-year-old professional footballer, who plays as either a central defender or central midfielder. She is currently on loan at Women’s Super League club Tottenham Hotspur, and has 78 international appearances for Austria. She was loaned out in the summer, due to a lack of minutes at Arsenal, and wanting to get them elsewhere.

When they signed Viki Schnadebeck, head coach Rehanne Skinner said this, “[Schnaderbeck] is an experienced centre half who brings a lot of value to the team. As Austrian national team captain she also brings strong leadership qualities. Viki will help us to establish control both in and out of possession with her ball quality.”

I think that Schnaderbeck’s contract expires at the end of the year with a few of the other players they signed from Bayern (such as Miedema and Evans), and so I think we could be seeing the last of her at Arsenal, especially due to the fact that the likes of Beattie and Patten have been facing similar problems operating in a similar area of the pitch.

Teyah Goldie is a 17-year-old footballer, who plays as either a central defender or left-back. She is currently on loan at Championship club Watford, and has 3 caps for the England U19’s. She was given dual-registration with the Hornets in the summer, as she needed to continue her development.

It’s likely that Teyah Goldie will go out on another loan deal next season. It has been good that she’s been continuing her development with Watford, and I think that building on that success with either a Championship, WSL club for future seasons could be a good idea.

Back to the squad/Stays at a similar level:

Leaves/Goes on a lower level loan:

This article has reached 7,500 characters, around 1300 words, and gone through the 6 players who have gone out on loan for the first team and are current players this season at Arsenal. If you have enjoyed this journey, please let us know, and I could bring more for your club or, if you are an Arsenal fan, more content going forward. I hope you enjoyed it. Make sure you check out the other versions! Bye!

7 Football Fans Who Won the Lottery

Academy: Where does every player Arsenal loaned out stand?