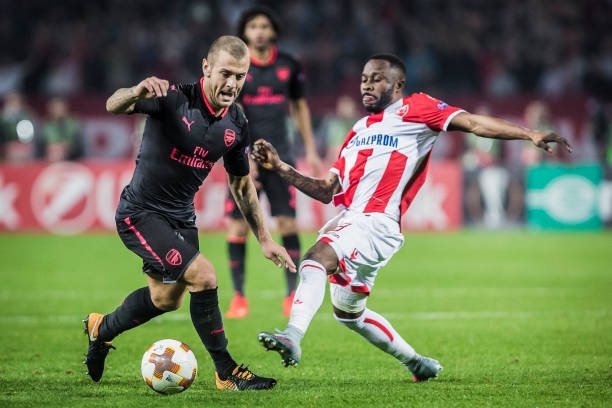 There has been a report that the gunners have begun negotiations with Jack Wilshere over a new deal because his current contract says that he should be leaving the Emirates stadium in June 2018. The English midfielder has been at the Emirates stadium since 2008 and he has established himself into one of the most loved players loved by the North Londoners due to his skillful playing style. It is said that Arsene Wenger wants to keep the Englishman for some more years because he sees some good potential in the player.

Jack Wilshere has had chances limited this season because the gunners have got a lot of options in the position he plays but he has been given starts in the Europa League where he has had impressive performances like even the most recent one which the Arsenal squad travelled to Serbia to face Red Star Belgrade, the gunners won that match after the Englishman linked up well with Olivier Giroud who scored the winning goal.

Arsene Wenger introduced Jack Wilshere into the gunners match against Everton in the 77th minute and that decision gifted his team another goal as the Englishman is the one who set up a well calculated assist to Aaron Ramsey who scored the fourth goal against the toffees on Sunday. The midfielder took to social media to thank the fans they showed to the squad as he usually does;

Good performance from the team today and a big 3 points. We needed that! Thank you to the fans for your continued support, much appreciated ? see you Tuesday ?⚽️

Jack Wilshere will be hoping that gets more chances in the English Premier League because he has already showed that he is capable and ready to put up a fight until he finally breaks into Arsene Wenger’s usual EPL lineup.

Arsene Wenger has been a long term admirer of Jack Wilshere after he gave him his first debut when he was only 17 years old but he has become a mature player these days but injuries have been the main hindrance to his footballing career as he could get injured for half of a season in the past years. Wenger usually says that Jack Wilshere is a player that can open up defenses if only he could have an injury free season.

Mesut Ozil Speaks Out His View On Yesterday’s Match