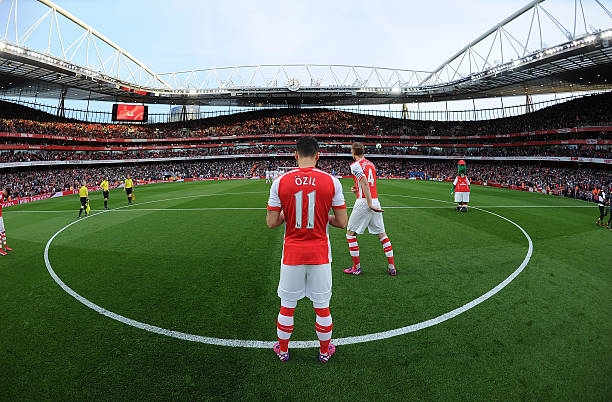 The gunners will be travelling to the Vicarage stadium this weekend as they hope to get three points. Mesut Ozil yet again posted a video on his social media account which shows him showing spectacular skills amidst rumours that are suggesting that the player will be leaving in January.

CHECK OUT THE VIDEO BELOW.

The German international posted that ‘BALLboa definitely not at his best today assisting my comeback work ?⚽. Nevertheless I’m really looking forward to Saturday’s match ? @premierleague @Arsenal’ it seems the player isn’t minding about the transfer speculations over his future as he says that he cannot wait for the gunner’s match against Watford.

Arsene Wenger confirmed that both Alexis Sanchez and Mesut Ozil can leave the Emirates stadium in the  January transfer window and this statement has sent gooners into fear that they may lose their assist king in a two months time. Mesut Ozil hasn’t started in the last three matches due to injury but he is expected back into the starting eleven this weekend when the gunners take on the hornets.

Manchester United are the club that is known to be much interested in the German international and are considering making a move for Mesut Ozil in the January transfer window because it is reported that Jose Mourinho is a big fan of the former Real Madrid star.  Mesut Ozil  arrived at the Emirates stadium in 2013 and he has since been a gift and great signing as he has won with the gunners three FA Cup trophies so he is a respected Arsenal player among the fanclubs.