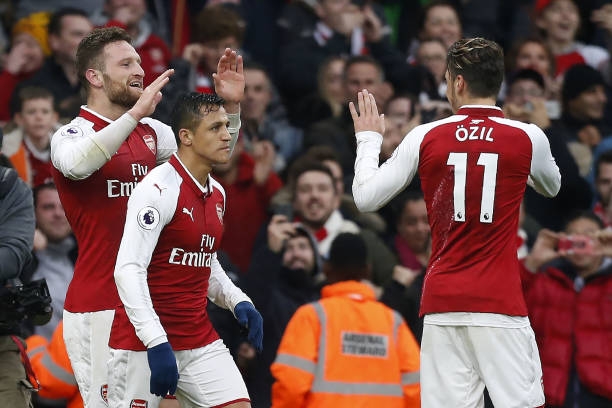 The gunners today defeated their arch rivals Tottenham Hotspur after a fine performance from the players that was not expected.

Arsenal defender Shkodran Mustafi opened the scoring for the gunners today when they hosted Spurs and the German international’s goal made a very big difference because it is the one that inspired the fellow teammates to show great commitment today.

Mesut Ozil was also very influential in the match and he is the one that assisted the goal scored by the defender. Shkodran Mustafi has revealed what he told the former Real Madrid man before finding him to head the ball to the back of the net.

“The thing is, as I was going up Ozil was on the other side of the pitch and I said Ozil, please go to the ball and bring it in. I know his left foot and I know his deliveries and if you have players that can put the ball in like that, you go in with belief.’ The defender told arsenal.com.

‘That is the most important thing when you go up for corners and free kicks the belief that you can score and with the team that we have and the quality that we have you go in and try to get your head on the ball.’

The most interesting thing is that Mesut Ozil has assisted all the three goals that Shkodran Mustafi has scored in his career at the Emirates stadium and it seems the country mates have a special bound because Ozil always got an eye for identifying out Mustafi.

Shkodran Mustafi arrived at the Emirates stadium last summer and he has been deemed a successful signing ever since because he has perfectly integerated with Laurent Koscielny to form the two pillars of the Arsenal defense because most of the supporters were so happy to welcome back the German international to the squad after weeks on being on the sidelines.

The defender was very outstanding in the North London derby today defensively and offensively because he scored the opening goal that gave momentum to the rest of the Arsenal players who also looked calm and very charismatic when playing against their arch rivals Tottenham Hotspur.

Mesut Ozil Gives Out His Say On Mustafi and The Match