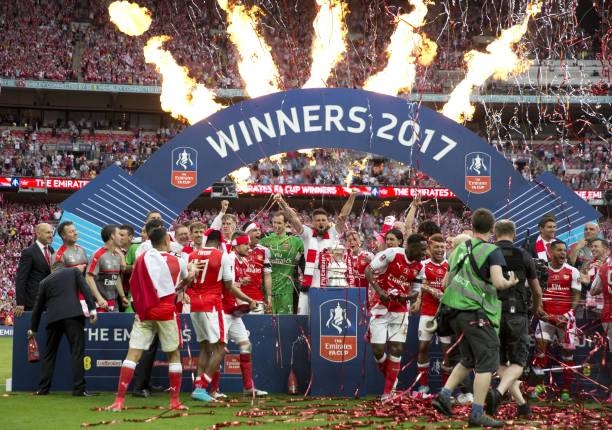 The gunners have had an interesting 2017 with a lot of sorrows and happiness amongst the fans as players getting setbacks and returning back to action.

It might not have been a fantastic year for Arsenal but it has been good for the supporters in some months but overall as a club, it has been awful because they this year tested Europa League football which they had spent years without participating in it.

The gunners finished outside the EPL top four for the first time after a very long time last year (2017) after finishing 5th with 75 points and then were demoted to the Europa League which they are currently playing in up to date.

FA Cup has currently become the favourite competition of gooners because it has become the only trophy they are capable of winning and it’s true because they were crowned 2016/17 FA Cup Champions after defeating Chelsea at the finals.

The gunners were drawn with Barcelona after the group stages and were defeated home and away by the Catalans hence getting knocked at the usual UCL round of 16.

The gunners reached the quarter finals of the competition but were surprisingly defeated by Southampton who beat them at their own home stadium which was very ashaming for the club.

So the gunners might have had a pretty rough 2017 but we have looked at the past season and did not tap into any of this season’s statistics but Arsenal owes it’s supporters due to the under. performance they showed last year and it’s no surprise that they called for the resignation of Arsene Wenger.

Analysis On The Current Arsenal Crisis ( Need To Read This)