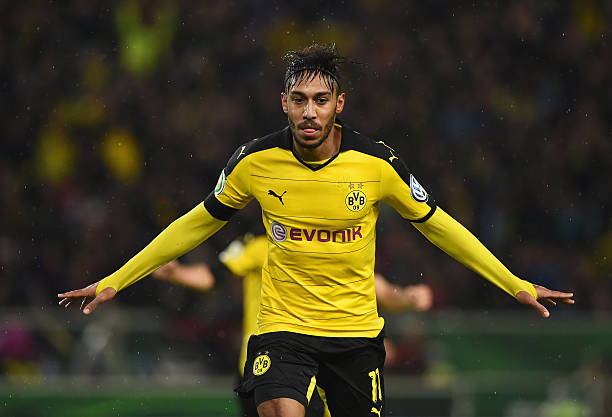 The gunners have been distress ever since the news about Alexis Sanchez leaving the Emirates Stadium broke out and it is speculated that Arsenal have now put their tabs on Aubamayeng.

The January transfer window is soon ending and it seems the gunners are working around the clock trying to get a replacement for now gone Alexis Sanchez and now the fans believe that their team is gonna bring Aubamayeng at the Emirates stadium after Hector Bellerin followed the player on Twitter today.

Another player following another player on social media might not be taken serious but the mind of an Arsenal fan is asking this;

1. Does this mean he is coming here at Emirates.

2. He followed him after knowing they gonna be teammates.

3. They aren’t friends but followed him then that means he knows their gonna be teammates.

Some players usually follow fellow players if they are from the same country but the gunners will now be waiting to see what happened next because Aubamayeng would be a big upgrade to the Arsenal squad.

The Borussia Dortmund forward has been a fantastic forward over the past few years and he has already scored 21 goals in 28 appearances this season which is quite good because the gunners have been finding it hard to put the ball into the back of the net this season so the fans are frustrated and need forwards to be bought this season.

If the reports are to be believed then the gunners will be expected to have made a staggering huge bid for the services of the African player because he is highly priced by the German club.

Sanchez Transfer To Manchester United Still On Hold For This Reason