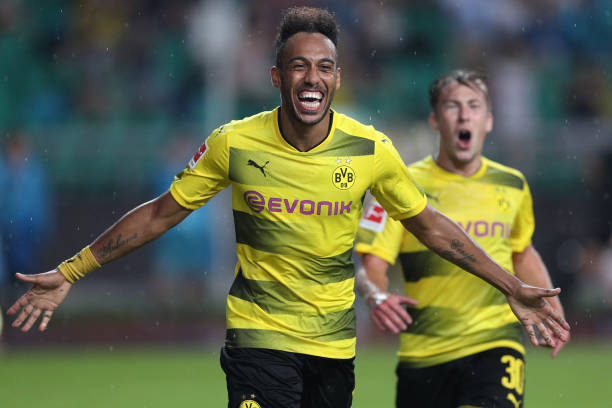 The gunners are now in the 2nd week of negotiating with German club Borussia Dortmund over a possible transfer of their highly rated attacker Aubamayeng to Arsenal.

There has been constant reports which claim that the gunners have failed to get the attacker because their bids have been too low than the amount which his current club values him but it is said that Arsenal will make more bids.

According to THE SUNDAY TIMES, the player now wants to join the gunners this season because of the admiration his father has for Arsene Wenger and the Gabon international will be hoping to make his Papa happy by going to the Emirates stadium in this January transfer window, it is said that the family is backing this move.

Arsenal has already had two bids rejected by the German club who have set a minimum amount estimated to be £60 million before they can even consider letting go of the versatile forward, some of the gunner fans are fuming with anger because they believe that Aubamayeng is worth that money so they do not see any reason to let this opportunity pass by yet it was even recently revealed that Arsenal is among the top 10 most richest clubs in the whole world.Arsene Wenger has been ignoring all the questions concerning the status of the negotiations but says that nothing is certain currently so they will have to wait in these final days of the January transfer window.