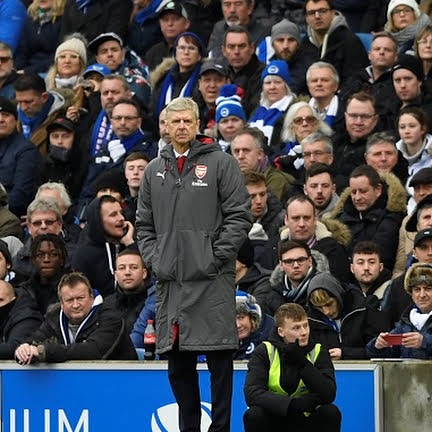 The gunners have today lost again but this time the loss comes against a bottom table team Brighton & Hove Albion who also defeat the under performing Arsenal team.

It is no lie that if a team under performs, the manager is the one to blame so for this case Arsene Wenger is the man to answer to the problems his team is facing currently. It is quite clear that French manager has lost the control of his team, all his ideas seem to be back firing in the last three matches.

The Frenchman has been the gunners manager for over two decades now and he is the longest serving English Premier League manager but it seems modern football isn’t his thing because he is still using the methods that they were being used in the 2000’s because he has failed to win the EPL since he last had an invincible team that went he whole season un beaten in 2004.

Arsene Wenger has no intention of resigning according to his recent statements even though the fans are calling for his resignation, he isn’t moved because he has passed through a lot ever since he became Arsenal manager in 1996.

Wenger: The Reign Is Over, The Dream Has Gone

Talking Points From Arsenal’s Loss Against City On Thursday