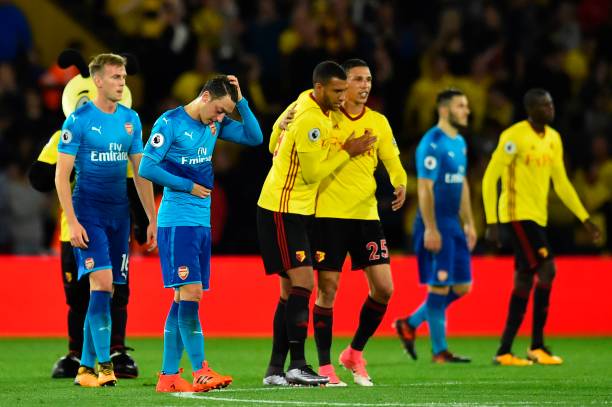 If Arsenal ever needed to reignite their dismal season , victory at the San Siro, against AC Milan was the perfect way to do so.

Last Thursday’s unexpected win should act as a launch pad in the premier league but Today’s match against Watford is going to be another key game Watford are a compact side , full of grit and determination and that alone in the past has seen them sweep Arsenal aside and go against the form books.

In their last encounter , Watford dug deep and out fought the gunners , almost bullying them in the process and no one typifies that show of strength more than Troy Deeney. The solid and muscular striker made it his personal mission to harass and intimidate the gunners defence , which saw them implode.

He was convincing and utterly impressive in that respect and was able to undermine our back four with consummate ease. He would be the first name on the Watford team sheet, if available and one which Arsenal will not relish the prospect of facing after such a torturous week.

The forthright strike has also managed to ruffle the feathers of the Arsenal boss by claiming that the team had no balls in their last meeting which provoked the unflappable Wenger into reacting.

The Arsenal manager rather uncharacteristically said that the first goal of Watford’s 2-1 win was as the result of ‘a cheap penalty from a good dive’ on Sky Sports.

He added in response to Deeney’s suggestion that the gunners lack balls that his team would respond on the pitch.

( Lacazette tackling with a player / Getty)

Deeney was an integral part of the consecutive win back in October of last year and was full of fire and bile when he almost bragged.

“I have to watch what I say, but it’s [having] a bit of cojones, is what I’ll say. Whenever I play against Arsenal, I’ll go up and think ‘let me whack the first one and see who wants it’… If you want to come into my world and do that, you can do that.”

Although his contract negotiations have stalled, the midfielder will be looking forward to showing that Arsenal can dig deep and slug out a result when required..

It all adds spice to an interesting encounter , which should be compulsive viewing. Watford will be organised and committed, looking to rile and bully the gunners by removing the space that they enjoy when advancing.

However , Mesut Ozil , Mkhitaryan and Aubameyang may yet upset the game plan, with both the German and Armenian combining , which may in turn benefit Arsenal’s most expensive purchase.

Watford are not all about Deeney but that mentality in the team may give the gunners plenty to think about and if they are complacent , it may prove to be an uncomfortable clash.