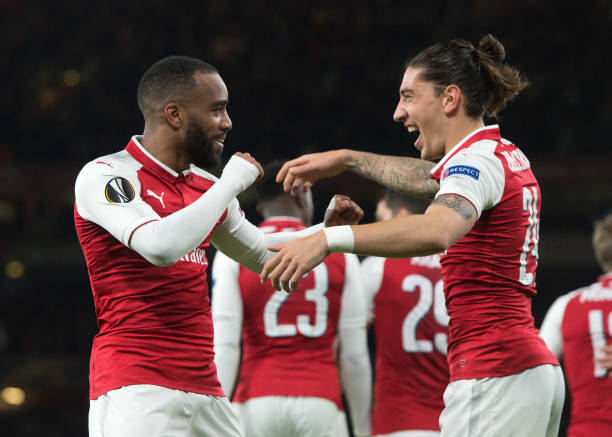 Arsenal have made a 1-1 draw with Atletico Madrid at the Emirates Stadium tonight and it’s a disappointing night for the home fans because they were expecting a win when the visitors got a red card in the first nine minutes into the match.

This seemed to be going a wonderful night for the home supporters after their skipper Alexandre Lacazette put the ball into the back of the net in the 60th minute but it looked like the club tried to defend the lead instead of looking for a second goal and that decision proved to be costly for Arsene Wenger’s men because Atletico Madrid’s henchman Griezmann was able to find an equaliser in the 81st minute.

This will be very poor result for Arsenal because the visiting side has obtained an important away goal which means that they will be able to qualify for the finals if they hold the gunners into a goaless draw in Spain next week.

What is hurting the fans is that their club failed to penetrate Diego Simeone’s men despite having 70% of the possession all the time but it seems the visitors were well ready for the offensive playing style of Arsenal.

The gunners will now wait for the return leg and hope that they be able to eliminate the Spanish giants who made the Emirates Stadium quiet after equalising at the end of the match.